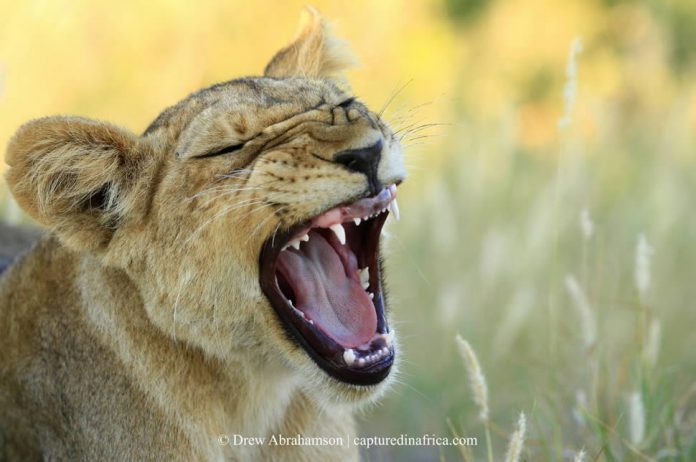 Late Friday night (30th October), lion conservationists were left feeling angry and frustrated at the fate of the once mighty and proud African Lion, when news broke that Lions may NOT be listed as a CITES Appendix I Endangered Species (a listing which would further safeguard lions from extinction). To decide the fate of the African Lion, CITES (Convention on International Trade in Endangered Species of Wild Fauna and Flora) established a working group on Thursday to discuss the details, literature and positions of various countries at the convention – currently being held in Sandton – with the purpose of coming to an agreed understanding whereby Lions would either be given improved protection under CITES Appendix I, or see their current listing under Appendix II amended in view of the above.

However conservationists at the event say that unbelievably Lions may not receive the protection they so desperately need, and which the public at large demands.

Lions are currently listed as Appendix II, with their numbers as low as approximately 15,000 – 20,000 throughout the entire African continent!

Last night at CITES CoP17 Ulinzi Africa Foundation posted live updates from discussions with US Fish & Wildlife Service’s Dan Ashe proposing to the lion working group at CITES “a split listing of lions in order to address the interests of South African captive lion breeders”. One conservationist described this as “saddening”.

Another update read: “South Africa willing to consider split listing but notes it should be done based on sub species” (see below) although this now appears to be off the cards. Conservationists are asking: has the African Lion been short-changed at CITES?

Some countries were not even invited into this discussion group to help determine the future of lions. A Burkina Faso spokesperson said: “Burkina Faso delegation notes with concern that they are a range country for lions and were not invited to the meeting in which 28 countries took part in.”

Tanzania on the other hand was invited… and aligned themselves with proposals by South Africa and Mozambique, saying “if you look at the sheer numbers of lions in these range states, we are talking about two-thirds of the lion population in Africa. We feel if these populations are listed in appendix I it will affect conservation of the species within these range states – it is going to be ‘counter productive’. We strongly oppose the inclusion of these four key lion populations in appendix I.”

What Tanzania did not mention are the remarks by various lion conservationists and professionals, that Tanzania appears to have high levels of corruption and occasional killing of young male lions which has devastating effects on the lion population.

Captured In Africa Foundation’s Drew Abrahamson explains: “For every one male lion killed, whether hunted by a trophy hunter, poached or killed by local farmers as a ‘pest’, up to seven lions may die as a direct consequence of that one lion being killed for his/her trophy or bones. That’s because that male is likely to be the dominant male of a pride, or perhaps looking to sire cubs of his own.

“The female killed may also be the pride’s protector or main food provider during hunting. So killing just one lion, is actually killing several lions all in one fell swoop”

Drew also recalls: “Poaching of our rhino as well as the trade in body parts escalated at the exact point that South Africa sold a stock pile of ivory. We must take heed of the examples already set with lion, rhino and elephants and pay attention to what’s gone before… that will always be the best evidence to work from when establishing new regulations and laws for the protection of endangered species.”

Guinea contributed to Friday’s African Lion discussion group, stating: “We are convinced that the lion meets criteria for listing on Appendix I on a continental level. We want Africa to speak with one voice. The trade of lion bones is a global threat which affects CITES for nearly 30 years.

“The trade of lion bones has been ongoing and is being exported to Asia… We have asked for stricter rules to stop that illegal trade and to strengthen the institutions of CITES.

“We regret an agreement cannot be reached for the protection of the lion.”

Earlier this year a documentary – Blood Lions – exposed the ‘canned lion’ hunting industry in South Africa. Up to 8,000 lions are in captivity in South Africa alone, bred to be killed, along with supplying an apparently legal trade in their bones to the Asian market.

Captured In Africa Foundation’s Paul Tully says: “It’s important to note, that when South Africa introduced a legal trade in lion bones in around 1997/98, there was barely no market for lion bones.

“I thought CITES was here to stop this kind of trade which threatened species?” – Paul Tully

“Since then, the Asian market realised they could replace Tiger bones in things like Tiger Cake and Tiger Bone Wine, with Lion bone. This has caused a huge increase in not only trade of lion bones, but captive lion farming in South Africa to supply and cater to this demand.

“On top of the lion farming supplying lion bones, wild lion poaching has increased – with the view that Asian markets often prefer wild specimens as they believe them to be purer. CITES are seemingly quite happy for South Africa’s government to continue making a mockery of lions.”

Tully continues: “I thought CITES was here to stop this kind of trade which threatened species? Increased trade, increased poaching, lawless and unregulated lion hunting, captive lion farming exploiting this species even further, not to even mention the huge deceit towards tourists and wildlife lovers worldwide – what’s protecting the African Lion about that? What we are arguing has all be proven and shows a very worrying trend of exploitation and clear decline populations of lion.”

Drew Abrahamson sums up the feeling from South African citizens and conservationists fighting for wildlife worldwide: “South Africa, Namibia and Zimbabwe… you have let your continent and the lions down! Listen to those who have no agenda but a passion for wildlife.”

Saturday will see the African Lion discussion group reconvene to finalise their agenda for lions. Conservationists are hoping that sanity prevails and we can finally ensure protection for our heritage. The magnificent African Lion.

On a final note – well done and thank you to those countries speaking up for lions and against the exploitation for profit and greed.