A large pride of lions brought traffic to a halt in the Kruger National Park, South Africa, after they’d hunted and killed a buffalo.

The lions then settled in for a long lunch… right in the middle of the road.

The incident occurred near Satara Rest Camp in South Africa’s famous Kruger National Park and took place in August 2016, but was only uploaded to YouTube this week.

The video was submitted by Shaun Wright. Watch below… and listen to the roars of  those lions! 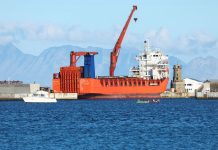