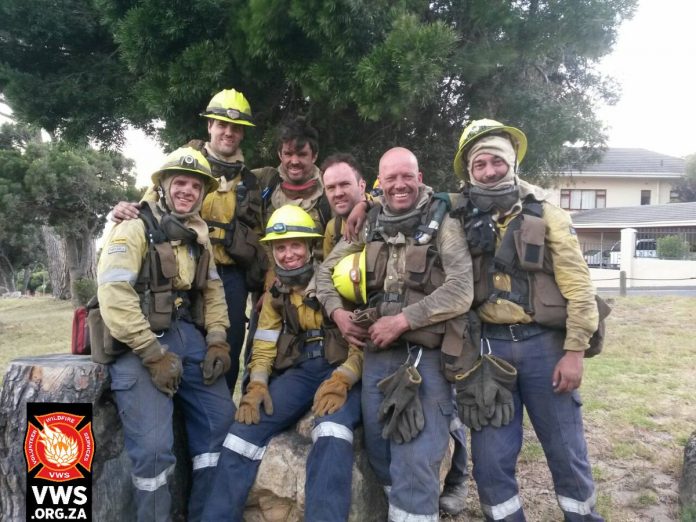 After an extremely tough night fighting the #DeerParkFire on the mountain slopes of Table Mountain in Cape Town, firefighting volunteers from Volunteer Wildfire Services (VWS) have been successfully stood down… and can now head out to their day jobs. But in Paarl, flames which began yesterday, are blazing and at least one building structure has been reportedly destroyed. According to latest reports, 140 people have been evacuated from two farms.

Social media was full this morning with messages of gratitude from local residents for the fire fighting heroes that saved their homes in Vredehoek from burning in the raging fire last night. Residents there were voluntarily evacuated.

VWS congratulated the fire crews involved and thanked the public for its support.

Locals are asked to “please continue to avoid the area for your own safety and to allow space for emergency services to work.”

In the meantime Du Toitskloof Mountain pass has been closed to traffic in both directions Tuesday morning as a result of a blaze along the mountain slopes.

According to Working on Fire, “T22 Firefighters as well as a Spotter plane and two Huey Helicopters are assisting CapeNature and the Cape Winelands District Municipality in an ongoing effort to contain the fire which broke out yesterday afternoon.”

Fire and Rescues’ Dereck Peceur says, “we have about 50 people currently working in area being assisted with aerial support in the form of two helicopters.”

Residents are asked to please help with water and food donations at Paarl Fire Station as reports come that at least one building structure has been destroyed.

After very hard night, crew of #VWS volunteers stands down from the #DeerParkFire and head to their day jobs. #ThankYou. @KFMza @CapeTalk pic.twitter.com/OF8hSdVhvc

Fiends of mine lost their homes, winery, vineyard in Paarl, and three children of +-14 started that blaze. Such sadness 🙁

For those of you wondering why everything smells like smoke this morning, check out this recap from #deerparkfire last night pic.twitter.com/Ta3lqVJvl4