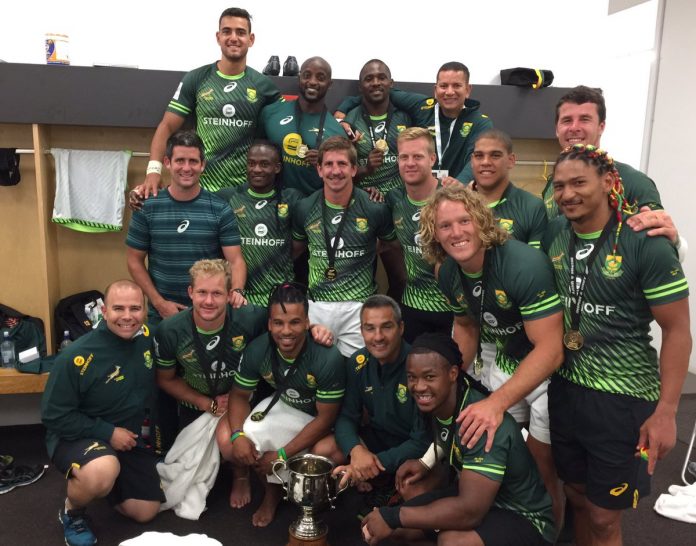 The Springbok Sevens team on Sunday clinched the Wellington Sevens tournament and extended their lead on the overall World Rugby Sevens Series log. A thrilling 26-6 win over Fiji secured only their second ever tournament win in New Zealand. And Seabelo Senatla broke the Blitzboks’ try-scoring record, achieving his 180th try in the final. (Watch the Victory Dance and Senatla’s record-breaking tie below.)

This victory, their second in the current 2016/17 series, also gives them a 12 point lead on the overall log. They started the Wellington tournament two points ahead of England and now lead Fiji, who moved into second, by 12 points.

The weekend in Wellington was a celebration of the team’s good form and consistency and not only resulted in a 24th tournament win for South Africa, but also some personal milestones being achieved.

Seabelo Senatla, named Player of the Final, scored a decisive try, his 180th in his career and moved past Fabian Juries (179) as the leading South African try-scorer of all time.

Springbok Sevens coach Neil Powell also recorded his first win at this venue as coach after claiming the previous Wellington win, in 2002, as a player.

? 180 ?@seabelo_senatla breaks the @Blitzboks try-scoring record, getting his 180th in the final of the #WellySevens pic.twitter.com/3HBmQS1ykP

? CELEBRATE ?@Blitzboks dance after their win at the #WellySevens pic.twitter.com/VweDgV9LGg

The Blitzboks scored 26 unanswered points in the final against Fiji, the current World Rugby Sevens Series title holders. The Fijians scored first, but a try just before the break by Senatla gave the momentum back to South Africa. This try moved Senatla pass the Juries mark.

The Blitzboks faced Canada in the semifinals and had to work hard on defence to keep the North American team at bay.

They had to make more than 50 tackles in the match and hardly missed any. They also counter-attacked brilliantly, with Senatla particularly dangerous.

The winger opened the scoring for his team in the second minute of play following a fumble by Canada and raced in for his 179th try, equalling the all-time try scoring record of Fabian Juries.

Kwagga Smith then showed good strength just before the half-time break to score after turning a ball over, with Du Preez’s conversion putting the Blitzboks 14-0 up.

The second half was another tight affair, with Canada continuing to use their physicality on attack. Werner Kok eased the nerves for coach Powell with an excellent run down the blindside, using his great pace to run 80 meters to score.

This pushed the score to 21-0 although Canada did get a try with a minute to play, South Africa could already start looking ahead to the final against Fiji, who earlier beat Scotland in their semifinal.

In their opening match on Day One, the Cup quarterfinals against France, the South Africans were brilliant on attack and defence.

They weathered a strong French onslaught early in the first half with some great defensive play before some outstanding play on attack, resulting in seven tries.

Justin Geduld was on fire in the opening half, scoring twice, with Branco du Preez also scoring a try and kicking two conversions for a 19-0 lead at the break.

The second half was very impressive. Seabelo Senatla scored two quick tries before being replaced by Siviwe Soyizwapi, who also dotted down soon after coming on. Ruhan Nel scored the final try of the match in what proved to be the biggest win in the Cup quarters.