Heartbreaking footage has been taken of a tame rhino calf – an orphan – who was shot and seriously wounded by poachers in Polokwane, South Africa, over the weekend. The little rhino, called ‘Vrystaat’, was shot twice. And while his horn was being brutally hacked off, he tried to stand and escape… and was shot again in the stomach.

His face and body are badly mutilated. He is traumatised… as is one of his carers who can be heard in the video below. His voice breaks, as Vrystaat staggers towards him, and he says: “Jy breek my v*kkin’ haart.”

According to the Polokwane Observer, police are searching for the suspects. The poachers allegedly shot two orphaned calves on the farm near Lephalale.

Both orphans have already lost their mothers to poachers, and both are still alive albeit seriously wounded. The second calf was not dehorned.

Perhaps this could be rock bottom, and the government can no longer ignore that it is time for tougher sentences that deter poachers from such cruelty in the greed for money. 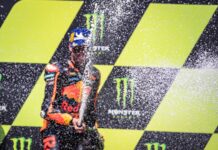