PRETORIA –  Following the horrific murder of a family of four on a farm in Mpumulanga, South Africa, on Tuesday, the Democratic Alliance (DA) has called for the reintroduction of rural safety units.

A man and his wife, along with both his parents, were found murdered, with bullet wounds, at their farm house in Modderbult yesterday.

According to the DA, there have been 30 farm attacks and 11 murders on farms across the country since the start of February.

The DA says it is time for President Jacob Zuma to commit to re-introduce the units, and called on him to do so in his SONA (State of the Nation Address) reply on Thursday.

The Hawks have arrested two Nigerian and two Mozambican men, aged between 20 and 36, in connection with the murders.

Hawks spokesperson Lieutenant Colonel Robert Netshiunda said the suspects were arrested at a nearby town in possession of laptops belonging to the victims. They were spotted, by officers, getting into a vehicle owned by one of the murder victims.

Netshiunda said “when the police introduced themselves a shootout ensued. The suspects were overpowered. One of them sustained injuries during the exchange of fire and is currently in hospital.”

The National Head of the Directorate for Priority Crime Investigation, Lieutenant General Mthandazo Ntlemeza, expressed his sadness on the incident but was quick to applaud the officers for a swift arrest.

“These are ugly scenes and perpetrators have no place in our society. Farm attacks are one of our priorities and we will dig very deep to establish the motive of the killings and ensure that those responsible for this heinous crime receive the harshest punishment,” Ntlemeza said.

The DA said: “Millions of South Africans in our rural communities, farmworkers and farmers alike, exist in a constant state of fear. They fear for their lives and the lives of their families. It does not have to be like this and can be addressed if the President does the right thing and brings back rural safety units.” 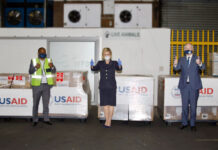