The 41-year-old Kenyan pea farmer and conservationist Patrick Mwalua is the founder of Tsavo Volunteers, a small but passionate operation that delivers water to areas of southern Kenya, where rainfall is sparse and detrimental to animals in the area’s Tsavo West National Park.

Mwalua personally drives his water truck hundreds of kilometres every week, delivering over 10 000 litres of water to the park’s dry watering holes. Despite being wild, elephants, buck and zebras recognise the sound of his truck approaching, and almost always wait patiently at the watering holes for his delivery.

In an interview with the environmental website The Dodo, Mwalua says “(Tsavo isn’t) really receiving rain the way we used to… [since June last year] there has been no rain [at all]. So I started giving animals water because I thought [that] if I don’t, they will die.”

The animals are forced to spend much needed energy travelling across the area to find active watering holes, often encountering violent confrontations with predators. Of particular concern for Mwalua, are the elephants, travelling into areas where they are more susceptible to poaching: “Elephants are becoming endangered and we need to save the ones we have left by providing water for them until the drought peril is over.”

Inspired by interest from overseas tourists and conservationists, Mwalua has now taken his project worldwide, starting a Go Fund Me online crowdfunding page to help finance the costs of transporting the water and expanding the conservation awareness programmes he offers to schools in the Tsavo area.

“I was born around here and grew up with wildlife and got a lot of passion about wildlife,” he says, “I decided to bring awareness to this so when they grow up they can protect their wildlife.”

Using the power of online social media, Mwalua interacts with thousands of contributors from across the globe, keeping them informed of the progress of the project.

To continue operating an effective water delivery system, Mwalua wants to extend his operation to include several trucks, as his own truck, which keeps him on the road for hours every day, is starting to feel the strain. So far, the Go Fund Me page has raised over $100 000 (about R1.3-million).

Visit the Tsavo Volunteers Go Fund Me page for news on the project and to contribute.

“(Mwalua’s) commitment to the wildlife and his heritage is unmeasurable,” says US conservationist Cher Callaway, who, along with Tami Calliope and Angie Brown, have been active in raising awareness of the project overseas.  Mwalua, they say, often “risks his own life in the middle of the night to deliver water to a dry water hole”.

With donations streaming in, Mwalua hopes the money can be used to find more permanent solutions to the crisis. He is also confident that the expectant rains in November this year will help lessen the strain for the animals.

Until then though Mwalua stays on the road, ensuring the animals get what they need to make it through the dry season. 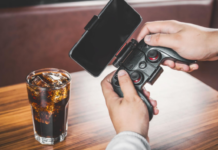 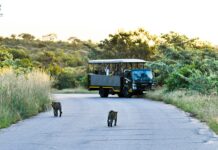 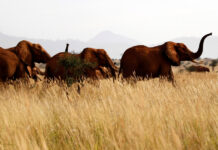