The Mo Ibrahim Foundation recently announced that once again, no-one had earned its annual prize for Achievement in African Leadership. The prize is meant to recognise probity and commitment to democracy and, crucially, it is awarded to people who have relinquished power with grace rather than outstaying their welcome.

Alas, such people are few and far between – and, in its short history, the prize has not often been awarded. In previous years members of the prize committee, such as Kofi Annan, have addressed packed press briefings to say no-one has won – these days, a single press release does the same job.

Standing in the way are the African continent’s persistent “gerontocrats” – ageing leaders hell-bent on ruling in perpetuity. Once they realise they aren’t immortal, they cling on in hopes of dying in office. Right up until the moment of death, they indulge in every medical technology the world can offer to stave off the inevitable.

Nigeria’s president, Muhammadu Buhari, is currently on extended sick leave in London to be treated for various ailments, most likely in an expensive private clinic. Eritrea’s president of 24 years, Isaias Afewerki, is rumoured to have secretly received urgent high-level medical treatment in Israel in the 1990s on a trip that paved the way for closer bilateral ties.

And most notoriously of all, Zimbabwe’s Robert Mugabe is well-known for his medical visits to Singapore. He’s officially being treated for a persistent eye complaint, but rumours abound that the treatment is for cancer. An increasingly frail 93-year-old, he always returns noticeably sprightly and rejuvenated.

Africa is hardly the only part of the world lumbered with such people. Various long-serving heads of state in post-Soviet Europe, Transcaucasia and Central Asian countries find it hard to leave office – they too “win” election after election and disingenuously claim to be loved by their people. But even they have their limits.

By and large, these leaders don’t seek to engineer their inevitable succession by members of their own family. Of course, family succession is hardly unique to Africa, and nor is it in itself wicked or anti-democratic: Singapore’s Lee Kwan Yew was succeeded by his son, as was Mauritius’s Anerood Jugnauth.

In the US, Robert Kennedy might have been elected president had he not been assassinated as his elder brother was, George H. W. Bush’s son served twice as long as he did, and Hillary Clinton very nearly became the 45th president instead of Donald Trump.

But the point is that anyone aspiring to lead, regardless of whether they share the genes or surname of another officeholder, must earn their mandate to do so in a fair and transparent election after a fair process of selection.

Power, unlike money, is not something to be inherited – and public accountability is a crucial safeguard against abuse of office. More than that, the privilege that elevates hereditary rulers has nothing to do with political or personal merit.

Sure enough, several creaking African leaders have loved ones waiting in the wings to take over without earning the right to do so.

In Zimbabwe, Grace Mugabe is still thought to be manoeuvring to succeed her husband; in South Africa, Nkosazana Dlamini-Zuma, Jacob Zuma’s former wife, seems a favourite to succeed him.

Things are a little more subtle in Angola. Long-serving president, José Eduardo Dos Santos, has announced he will finally step down this year, and his rumoured successor is not a member of his family. But that doesn’t mean the Dos Santos family will lose their grip on the country – they still control civil society, private capital and the central bank’s sovereign wealth fund. Dos Santos’s daughter Isabel heads up Sonangol, the state-owned oil company.

Holding on while elderly and sick, living on through wives and family members – these are the symptoms of an almost clinical psychotropic condition in the elite African political class. Power is a drug – eventually it addles even the longest-lived presidents, draining them of any impetus to do anything except to cling onto life, and therefore to power itself.

Many of these leaders once used their tenacity to serve not just themselves, but their people. Some of those still clinging would do well to remember there are prizes for stepping down. The Mo Ibrahim Prize, for one, comes with enough money to fund a long retirement.

The Nine Longest-Serving Leaders in Africa (and Zimbabwe’s Robert Mugabe doesn’t even make it into the Top 3!)

Covid-19 Causes Some Patients’ Immune Systems to Attack Their Own Bodies, Which May Contribute to Severe Illness 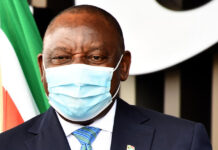