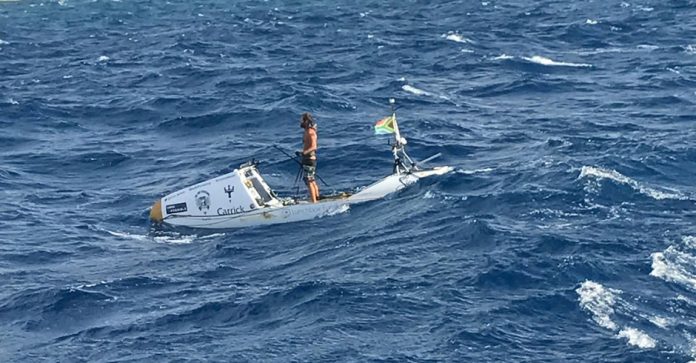 South African stand-up paddle boarder Chris Bertish has successfully completed his incredible record-breaking journey – alone – across the Atlantic. His wife was there to greet him… with a South Africa flag of course! (See video below.)

The 42-year-old paddled into English Harbour, Antigua, on Thursday after his epic 93-day solo trip across the ocean.

In his final captain’s log, at 14h00 South African time, he wrote: “Full Circle! now do you believe in I’mPossible!”

He calculated he had made over two million strokes to get there, and raised over R6.5-million so far… with another R5.6-million expected in Gala dinners on his return.

He broke three world records with this latest epic feat… and most importantly has changed the lives of millions of South African kids over the next two decades. The money raised will build at least five schools, feed and educate thousands of children with The Lunchbox Fund, and pay for life-changing cleft lip and palate surgeries.

Chris wrote: “It took everything I had for over 5 years, just to get this project up… and myself to the start line in Morocco after building the Impifish for this specific goal and purpose, in England!

He said quitting was never an option. It was his duty, his “legacy project”, to complete this for the SA children and to inspire the world and make people think of what’s possible in their lives.

“As I got older the challenges by people were the same, saying what I couldn’t do or was impossible, they just got bigger…”

Chris uses visualisation in all aspects of his life.. and encourages others to do so. Today’s completion, for instance, is a day he had already lived over 350 times before.

“It’s like seeing the future before it happens and then creating it!”

If Chris has inspired you, please consider donating and helping the kids of SA:
www.thesupcrossing.com/donate

The last 72 hours were apparently amongst the most difficult, largely due to the weather… but we’ll have to wait for his book later this year – “Going the Distance” – to read the full story!