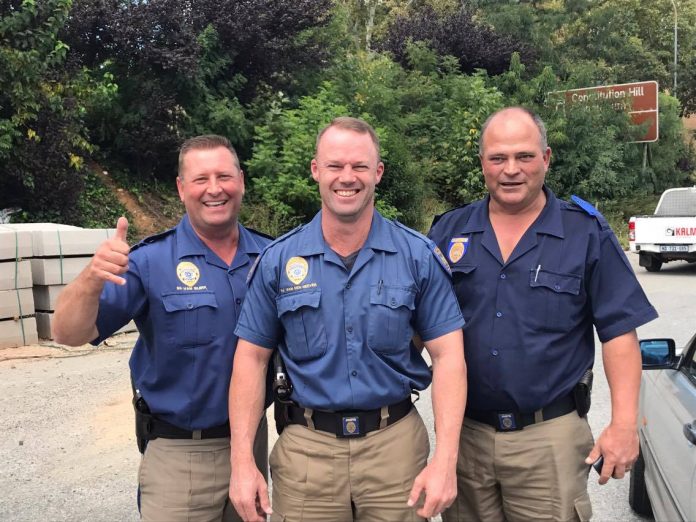 It’s easy to complain when things go wrong… but sometimes we forget just what our police force goes through, risking their lives to keep us safe. For instance, this weekend the Durban police worked tirelessly to successfully find a one-month-old missing baby… in what turned out to be a “false claim of crime” (in the words of the acting national commissioner).

And on Friday – while most of us were looking forward to a weekend of fun, a prayer service was being held in the Northern Cape in memory of two of their own – members of the South African Police Service (SAPS) who were fatally wounded during a shootout with a domestic violence suspect, on Thursday in Kimberley.

They risk it all, so this is a shout out to those cops who work so hard for the good of the country, and set a good role model for all of us… including these three officers from the Johannesburg Metropolitan Police Department (JMPD).

“They escorted us to a safe place to stop while we waited for roadside assistance.

“Yes, this is their job… BUT to do it with the smiles and enthusiasm they did is one of the reasons why South Africa is such a great country.”

AJ also said: “To the citizens who stopped and assisted these great men and fellow citizens in distress – THANK YOU!”

P.S. And an extra shout out to the admin of SAPS’ Facebook page. Of all the ‘official’ social media pages in South Africa – SAPS are the quickest and most personable, in SAPeople’s experience, to respond to our queries with real answers… and without only using unhelpful automated messages – like some political parties!