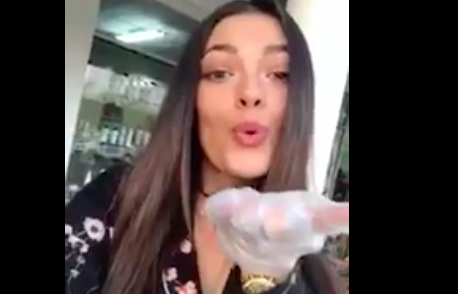 After Miss South Africa, Demi-Leigh Nel-Peters, was criticised by some for wearing gloves to hand out food to children, at a soup drive this week in Soweto, Twitter went crazy with a #MissSAChallenge making fun of her… but nobody has posted a better video than Demi-Leigh herself! Watch below…

Demi-Leigh, like all volunteers at the pop-up soup kitchen, had been wearing gloves as was mandatory, for health purposes (and as is done all around the world!). While handing out food, she had kindly agreed to pose for photos while she still happened to have her gloves on.

Watch Demi-Leigh’s #MissSAChallenge below… and join her next Wednesday at the next soup kitchen challenge:

The facts on what happened… South Africans on Twitter have come up with #MissSAchallenge, check it out. #sabcnews pic.twitter.com/dduPAQERJ6

When your hands are feeling a bit dry but hygiene always comes first… ?? #MissSAChallenge pic.twitter.com/UjHuV3CHNE

That moment when everyone is doing the #MissSAChallenge and you don't have gloves. ???? pic.twitter.com/VhUeaQN4zJ