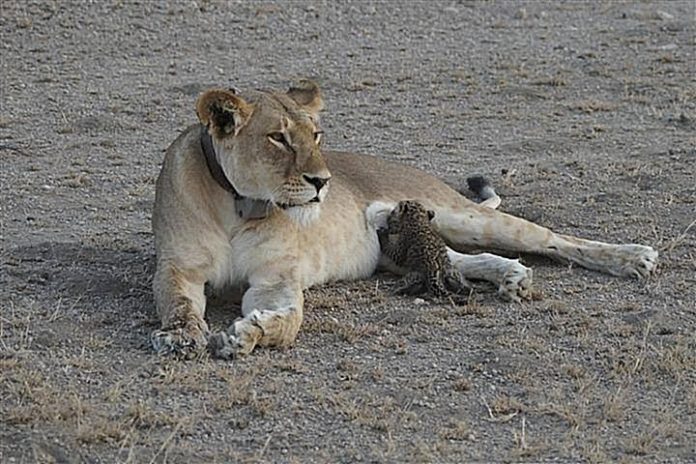 The Ndutu Safari Lodge in Tanzania has been thrust into the world spotlight since one of its lionesses was photographed this week, in an extremely rare position – nursing a leopard cub!

Usually she would have killed the cub… but it’s believed her strong maternal instincts, brought on by the recent birth of her own cubs… may have overridden her normal instincts.

Yesterday, Ndutu posted a message on Facebook saying: “A WORLD FIRST…. Our lovely Nosikitok, in a surge of maternal confusion, briefly adopted a 3 week old leopard cub. Seen and photographed by our guest Joop Van Der Linde, the news has stunned the Lion world, and made world headlines.”

According to non-profit wild cat conservation organisation, Panthera, cross-species nursing like this is highly unusual for big cats.

Joop captured the rare event in the Ngorongoro Conservation Area on Tuesday.

The 5-year-old lioness is currently collared and monitored by Kope Lion, a conservation NGO supported by Panthera, and thought to have given birth to a litter of cubs in June, said Panthera. Experts are unsure of the cub’s age. Some say three weeks, others two months.

Panthera President Dr. Luke Hunter says: “This is a truly unique case. I know of no other example of inter-species adoption or nursing like this among big cats in the wild. This lioness is known to have recently given birth to her own cubs, which is a critical factor. She is physiologically primed to take care of baby cats, and the little leopard fits the bill—it is almost exactly the age of her own cubs and physically very similar to them.

“She would not be nursing the cub if she wasn’t already awash with a ferocious maternal drive (which is typical of lionesses).

“Even so, there has never been another case like it, and why it has occurred now is mystifying. It is quite possible she has lost her own cubs, and found the leopard cub in her bereaved state when she would be particularly vulnerable.”

Sadly, Dr Hunter says that even if the lioness continues taking care of the leopard cub, its chances of survival are slim.

“It is very unlikely that the lioness’ pride will accept it. Lions have very rich, complicated social relationships in which they recognize individuals—by sight and by roars—and so they are very well equipped to distinguish their cubs from others. If the rest of the pride finds the cub, it is likely it would be killed.”

He says however, that should the leopard survive to become independent (at around 12-18 months), then it would most probably revert to behaving as a leopard.

See and share these incredible photos–THE FIRST EVER–of a wild lioness nursing a leopard cub! Cross-species nursing such as this is highly unusual for big cats, but Joop Van Der Linde, a guest at Ndutu Safari Lodge in Tanzania's Ngorongoro Conservation Area, was lucky enough to catch the rare event on camera this week. The ultra-maternal lioness, 5-year-old 'Nosikitok,' is currently collared and monitored by Kope Lion, a conservation NGO supported by Panthera, and thought to have given birth to a litter of cubs in June. Learn more about these beautiful species at panthera.org–and stay tuned for more details on this story!Sign up for updates about the issues facing wild cats around the world—and learn how you can help: http://bit.ly/2urNlNR.