South Africa’s mid-year population has increased by close to a million from 2016 to 2017, says Statistician-General Pali Lehohla.

There is a majority of about 45.7 million black Africans living in the country, making up 81% of the entire population of South Africa.

The second largest population group is about five million coloured people who represent 9%, followed by about 4.5 million white people who makes up to 8%, and the least being about 1.4 million Indians who represent about 2% of the country’s population.

“The proportion of elderly persons aged 60 and older is increasing over time,” said Lehohla.

Lehohla said migration is an important demographic process in shaping the age structure and distribution of the provincial population.

“For the period 2016-2021 it is estimated that Gauteng and Western Cape could experience the largest inflow of migrants of approximately 1 595 106 and 485 560 respectively.

“Over the last five years, five out of every ten international migrants have settled in Gauteng Province.”

He also said Gauteng, Western Cape, Mpumalanga and the North West provinces are net receivers of in-migrants, whereas Limpopo and Eastern Cape experienced the largest outflow.

He said life expectancy has increased by approximately two years from the 2012 estimates.

Lehohla said the decline in life expectancy between 2002 and 2006 can be attributed to HIV and Aids.

However, he also said the gains in life expectancy is accredited to access to Antiretroviral Therapy (ART).

“Approximately one-fifth of South African women in their reproductive ages are HIV positive.”

The estimated overall HIV prevalence rate is approximately 12.6% among the South African population.

The total number of people living with HIV is estimated at approximately 7.06 million in 2017. 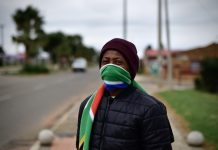 WATCH Adele Parody: Hello (from the Inside). Viewed by Over 6...