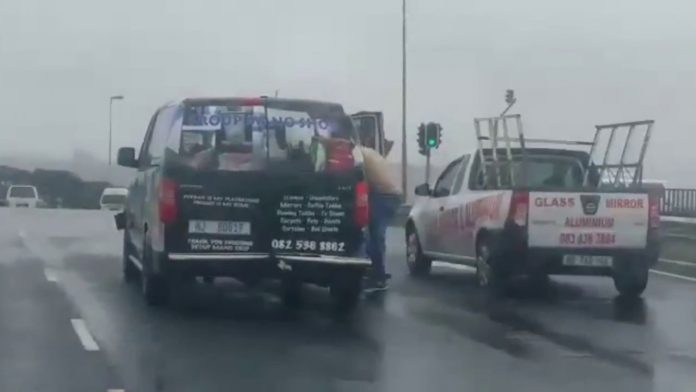 KwaZulu-Natal resident Cristelle Barnes is still desperately seeking a woman who was driving a white car, which was involved in an accident last week in Durban, South Africa.

Christelle posted a message to Facebook on 28 September asking friends to share her “CRY FOR HELP” in the hope it would reach the lady.

She wrote: “My husband was involved in a car accident at midday today… just before the Queen Nandi drive turn off on the N2 freeway, heading South. It was a Black panel van with logo “Group Mano shop” that pushed him off the road and also drove into the back of another vehicle.

“He [the man in the panel van] fled the scene and my husband chased after him and blocked him off to get his details.

“[My husband] was then brutally attacked by this driver of the panel van and he used a wheel spanner. There was another white vehicle involved and the lady was taken to hospital.

“This post is for you – the lady in the white car – details of the driver that drove into the back of your vehicle. All pictures attached.

“I really hope that this post reaches you and that justice is served.”

Cristelle included photos of the man’s face, his licence disc, his number plate and his business phone number.

Cristelle told SAPeople today that she has still not located the female driver. Thanks to the “phenomenal” response on Facebook, she does now have the name and details of the man in the panel van… but there has been no apology from him.

“When he was contacted by several people, he said my husband attacked him first,” said Cristelle. “However a kind gentleman took a video proving this is not true.” Watch below.

If you know who the lady in the white vehicle was, please let her know to view Cristelle’s post here: www.facebook.com/cristelle.vos/posts/10159360051340324

Meanwhile in happier vehicle news, tourists from Botswana would like to find a very kind BMW female driver in Gauteng:

Here's a message for a kind Gauteng motorist from Irene Thea Smith, Botswana: "I would like to thank the woman driver of…

Posted by SA-People – for South Africans in South Africa and expats on Tuesday, October 3, 2017