In a small classroom learners from Masiphumelele are learning a new skill: playing the violin.

The outreach program, that takes place on the campus of non-profit organisation Masiphumelele Corporation, is run by Titia Blake. “I’m trying to teach children to do what I do, and that is to play for weddings and functions,” she says. 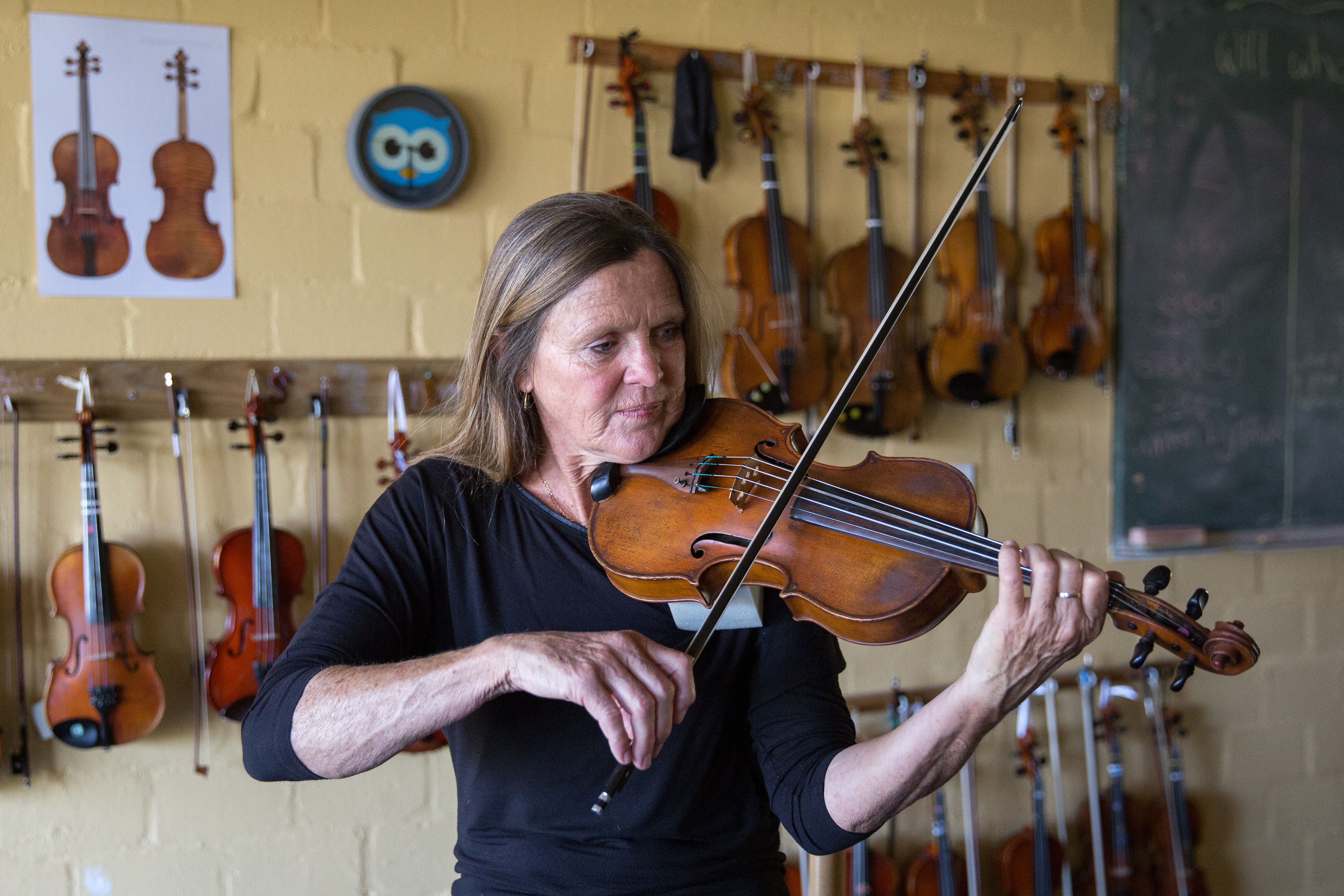 Blake believes that education is the only way to solve the ills of society. “And my specialty is the violin and therefore the violin program.”

The program has now been running for six years and has about 30 students. Blake’s own band is called the Palm Strings. She calls the younger students “The Palm Stringlets”. Violins, performance posters and music pictures line the walls of the classroom.

The students arrive in casual clothes, school uniforms and even soccer apparel. Before they start, they listen closely to Blake, tuning their violins. None of them read sheet music, so they practice by listening and remembering. The violins have been donated by Bishops Diocesan College and individuals. Although Blake mostly teaches on Mondays and Thursday, the kids come out on their own to practice almost daily.

Students learn a classical repertoire but also play more popular music such as Ed Sheeran’s Thinking out Loud and John Legend’s All of Me.

Hazel Manzana, who is 13, has been practising for almost two years. She says she loves the instrument. “Violin gives me lots of passion,” she says. Playing the violin is challenging, but Manzana wishes to be a musician in the future.

Some of the students have played at the Cape Town International Convention Centre, the City Hall and at weddings. A handful of the more senior and experienced students are also making an income by busking in Simon’s Town and Kalk Bay.

One of the busking students is 16-year-old Onke Gili. He has been playing violin for four years. “I see myself as a violin teacher but not teaching young children because I’m short tempered,” he says as other students chuckle in the background.

Gili and his friends have been busking for two years in Simon’s Town. Gili likes it because he makes money. In the photo above, he plays alongside 17-year-old Ayebonga Tshmese who also busks with him.

Another busking student is 17-year-old Nopaseka Vika. She has been playing violin for six years. “We like the African beats and we also play classics,” says Vika. “We sometimes get invited by people and we play by their weddings and parties.” Vika wants to be a musician.

Blake hopes that one day some of her students will make a living from music and join the Cape Philharmonic Youth Orchestra.