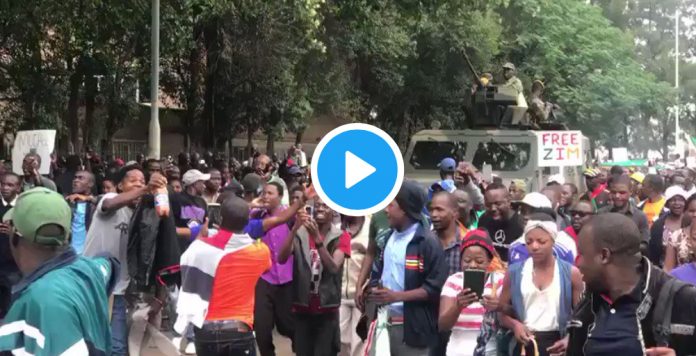 Peaceful and emotional scenes have been witnessed in Zimbabwe today as tens of thousands came out in force to march alongside the army and call for President Robert Mugabe to step down. See videos and images below.

According to journalist Trevor Ncube, the mood on the streets of Harare was “festive and celebratory”.

Trevor tweeted a message to the world:

We are fully aware of the possible risks and pitfalls beyond this tipping point. We are confident we will be equal to the challenges. Yes we remember Egypt too.
After 37 years of repression allow us to soak-in this moment.

The Zimbabwe journalist said the general sentiment of the people in the country is, as described by one of his followers, “I can’t believe this… it’s like l am dreaming, thank you Lord.” The people are hoping for a #FreshStart…

Here is another one sir pic.twitter.com/rEThmcjWrE

“Am at Sheraton area now the situation is like 2nd Independence”. From my father – a non-partisan pensioner, who last did this on 18/4/1980

This is the end of RobertMugabe's ruthless dictatorship. In the end,he wasn't brought down by the masses but by a coercive state apparatus he used for decades against opponents. The masses don't care about HOW he has fallen.They're embracing a new day, an opportunity for renewal.

This is what we were all afraid of. Please share the hell out of this!