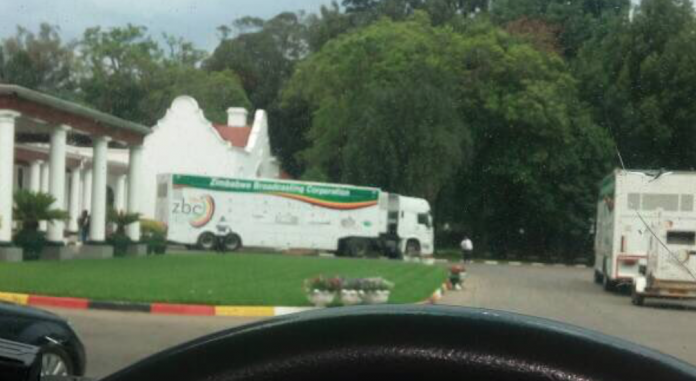 Zimbabwe’s ruling party – Zanu-PF – has voted to sack its longtime leader, Robert Mugabe (93). The party has also expelled his wife Grace (Chair of the Zanu-PF Women’s League) whose mission to be the next leader led to the current non-coup coup. And the man who Mugabe fired as Vice President a fortnight ago – after his supporters allegedly booed Grace Mugabe (52) at a rally – has been appointed by Zanu-PF as Zimbabwe’s new interim leader.

According to the Guardian newspaper in the UK, when the motion was passed removing Mugabe as leader and appointing Emmerson Mnangagwa (75) in his position, the hall of about 200 members “broke into cheers, song and dance”.

Mugabe has refused to step down since the military put him under house arrest earlier this week, and despite thousands marching through the streets of Harare yesterday to demand he leaves.

According to the Guardian, Zimbabwe’s parliament will reconvene on Tuesday and is likely to impeach Mugabe if he has not yet relinquished power. He has reportedly been given until Monday noon to resign. Sources close to Mugabe are quoted as saying that he wishes to stay on until his term ends next year. Mugabe has been in power for 37 years.

Meanwhile the Zimbabwe Broadcasting Corporation TV truck has been seen outside Statehouse in the last hour. It is expected that Mugabe is going to announce that he agrees to step down.

WATCH LIVE: PRESIDENT ROBERT MUGABE EXPECTED TO ADDRESS THE NATION OF ZIMBABWE AND ANNOUNCE HIS RESIGNATION

Robert #Mugabe has been dismissed as leader of the ruling ZANU-PF party in #Zimbabwe, Reuters sources say pic.twitter.com/ydLwFYxwjn

Mugabe is expected to step down on Sunday night:

Zimbabwe is a few minutes away from erupting in euphoria.History in the making.The outpouring of pent-up emotion,the shear magnitude of this moment,the unassailable belief that a brighter future beckons.Never again shall we be reduced to zombies.We need healing,justice,prosperity

ZTV OutSide Broadcast vans at Statehouse. We don’t know what President Mugabe wants to share. We are all ears #Zimbabwe ?? pic.twitter.com/oj2d2HoYal

Mugabe Jnr going through the most ??? pic.twitter.com/hJBNaFpgRI

2. ZanuPF left out South Africa in its vote of thanks

The People Matter more than regimes.

The meeting with Service Chiefs I tweeted about. Meeting appears done. ZTV OB vans at Statehouse . Expect a middle finger from Bob or #ApoloJersy
?? pic.twitter.com/PORNW6Q2mS

REFLECT ON THIS
??
Did you experience/witness violence/looting during the solidarity march across Zimbabwe yesterday. I didn’t.
There was zero police presence.
So next time people say Zimbabweans are criminals remind them of this. We are humble peace loving people #Zimbabwe

OMG: ZIMBABWEANS ARE NOW OUTSIDE THE PRIVATE RESIDENCE OF ROBERT MUGABE AKA BLUE HOUSE. pic.twitter.com/zn6nUdvkHa

The Chipanga Challenge (saying sorry while wearing that shirt):

If you’re overseas you can watch #CarteBlanche’s in-depth Zimbabwe analysis (plus thousands of other popular local shows & movies) – subscribe to Showmax now. You can try it FREE for 14 days.