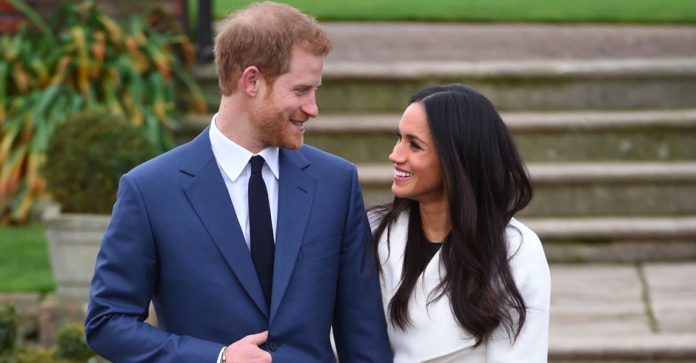 Prince Harry and his fiancee Meghan Markle posed for photographers at Kensington Palace’s Sunken Garden on Monday afternoon, to “mark the happy news” of their engagement.

The royal prince and the American television star (Rachel Zane in ‘Suits’) are set to get married in Spring 2018. They were engaged earlier this month in London, but only announced it to the public today.

The Duke and Duchess of Cambridge (Prince William and Kate) said: “We are very excited for Harry and Meghan. It has been wonderful getting to know Meghan and to see how happy she and Harry are together.”

The Queen and The Duke of Edinburgh are “delighted for the couple and wish them every happiness”.

Meghan’s parents – Thomas Markle and Doria Ragland – said: “We are incredibly happy for Meghan and Harry. Our daughter has always been a kind and loving person. To see her union with Harry, who shares the same qualities, is a source of great joy for us as parents.

“We wish them a lifetime of happiness and are very excited for their future together.”

We’re sure part of that future will include trips to Prince Harry’s beloved Sentebale charity in Lesotho, and to South Africa – a part of the world he loves (particularly the wildlife), and has visited many times.

The couple said they are “thrilled and happy” to be engaged, and will take part in a broadcast interview this evening in the UK.

Prince Harry and Ms. Meghan Markle are "thrilled and happy" to be engaged. pic.twitter.com/HBz30SbZVE

Prince Harry & Meghan Markle arrive for a photocall at Kensington Palace Gardens on the day their engagement is announced. pic.twitter.com/YkcEvosY9L

The Prince of Wales has announced the engagement of Prince Harry and Ms. Meghan Markle. pic.twitter.com/rtlAnFCWTf