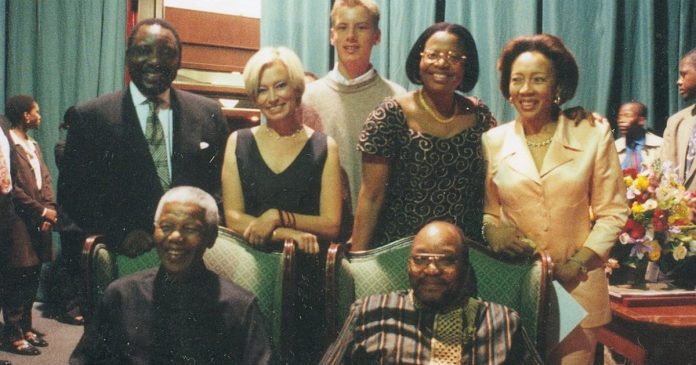 Award-winning writer, and Nelson Mandela’s authorised biographer, Charlene Smith was the first journalist to ever interview Cyril Ramaphosa. She thinks it was in 1982 or 1983. Here Charlene recalls some of her memories with the new ANC President over the years…

He’d just formed the NUM [National Union of Mineworkers] and the offices were two rooms in an old building near Darragh House, up dark stairs, I was too nervous to take the clanking elevator. It was winter. In the office was a single table and two chairs, that’s it, not even a phone as far as I recall.

It was winter and it was so cold Cyril sat in his black leather jacket – which became his trademark for years. I was bundled in my only coat. We sat in the middle of the floor, no table between us, talking while I took notes in my reporter’s notebook.

I was impressed by his sincerity and his intellect. He was the cleverest person I had ever interviewed. I was working for the Sunday Express and came back and wrote a story that had the mine bosses up in arms.

They wanted no publicity on this man or his union. They served a notice on the paper after the first edition and the story was pulled from subsequent editions.

There were no inaccuracies, it was pure intimidation.

I was furious and threatened to resign. I was told by my editor that the piece was too partial to the NUM. I responded that it was an accurate reflection of an important interview with the man leading what I believed would become the biggest union in the country. I was right.

Because I reported on resistance politics, Cyril and I often came into contact. We respected each other. By the mid-80s I was now part of the underground and we met under different circumstances.

It was only after I left SA to live in Japan and then Argentina, returning after the assassination of my friend David Webster in 1989 that Cyril and I became close friends.

I was asked in the first months of my return by the Arch and others to begin the first investigations into death squads, that was August 1989 and we soon had Nofomela’s affidavit.

I lived with my children in a tiny house in Saxonwold and because I love to cook and I am a good listener many struggle comrades visited, Vusi Khanyile, Mohammed Valli Moosa, Cyril Ramaphosa, Sydney Mufamadi and more. They were all exhausted. Years of being on the run were taking a heavy toll.

“sometimes he would call at 11 at night”

Cyril and I bonded, sometimes he would call at 11 at night after a day of visiting mines and ask if he could pop around. (The others did this too) I’d always say yes and he knew that when he arrived there would be a hot, freshly cooked meal waiting and we’d talk for hours. We were only ever friends.

I loved his commitment to the mineworkers – by now his union had offices on three floors across town. I worried by how fast he drove.

Our only point of dissension was that he had a son by a humble woman in Pretoria and failed in his duties as a father. I gave him hell and said if he did not start seeing his boy and contributing to his life he could no longer visit me.

Cyril’s dad was a policeman and from him he had a sense of ethics to the community he served, but his relationship to his dad was not as close as he would have preferred and I felt he could heal that by better bonding with his son and supporting the boy’s mom.

He began seeing his son and years later that boy was a rugby star at Michaelhouse.

In 1990, February, Cyril, contracted pneumonia and was at the Rand Clinic. I’d visit and we’d chat, but the visit I recall was on Feb. 10. I took him a big bunch of green grapes. As I entered he was reading Barbara Tuchman’s The March of Folly. He said, “every politician must read this.”

He said he thought Mandela was coming out the next day, Valli had already chartered a plane to be on standby and when it was certain Mandela would be released, he would remove his drip and go.

Me being silly said, no, you mustn’t do that, you’re sick.

Pics the next day show him holding Mandela’s mike on CT city hall steps wearing a plaster where the drip was.

Jacob Zuma early on asserted himself as a would be leader. He and Mathews Phosa were first in the country from exile to lay the foundation for the May 1990 Pretoria Accord. When I met Mathews for the first time at a restaurant in Illovo, he was sitting right at the back, back against the wall. I loved Mathews, still do, but Jacob left me uncomfortable, too loud, too fake.

At the launch of my first Mandela book in August 1999, there was a group photo. Zuma sat himself next to Mandela – manners demanded Graca should sit there, but manners are foreign to Zuma. Graca stood behind Madiba and so did Cyril and the rest of us.

Cyril and Madiba were very close, Cyril was the man Madiba wanted to be president in 1999 but Thabo’s skullduggery had to be seen to be believed – which Zuma used against him years later, and I suspect Cyril will need to use now, and not just for the election but to clean the sewer that the SA political system has become.

1999 was the arms deal. Years later a prominent businessman told me of how he owned one of the armaments companies tendering. He was approached by Zuma who told him that for the bargain basement bribe of R36-m, this businessman would get the deal. The businessman promised to think about it, called an urgent board meeting and they sold the company.

In August 2012 was Marikana, 14 mineworkers died when police opened fire. It shocked the world. Cyril’s role was disturbing. In October of that year one of my oldest friends died, Zwelakhe Sisulu, we trained as journalists together. On the Monday before he died Zwelakhe called me and we chatted for three hours. He never woke up on Thursday. I flew back for his funeral and saw Cyril, I asked, “what was Marikana about?”
His face went cold, he said, “things happen.”
“No, they don’t,” I said, “they don’t.”
We haven’t spoken since.

“Cyril will be the greatest president South Africa has ever had”

I need to tell you this: Cyril will be the greatest president South Africa has ever had. Greater even than Madiba because shit not cleared since apartheid has grown higher and smellier with the corruption of the new. Repairing SA is a big task not easily achieved.

Yes, Cyril has messed up but as Madiba said: “Do not judge me by my successes, judge me by how many times I fell down and got back up again.”

I remind Cyril of Barbara Tuchman’s prophetic words, ignored by Mbeki and Zuma; men of small egos and big vanities, they are words every leader in the world needs to heed, but today, my focus is on my birth country. The country of my heart.

“Folly is a child of power … power corrupts… the power to command frequently causes failure to think; [and] the overall responsibility of power often fades as it exercise augments.

“The overall responsibility of power is to govern as reasonably as possible in the interest of the state and its citizens. A duty in that process is to keep well-informed, to heed information, to keep mind and judgment open and to resist the insidious spell of wooden-headedness. If the mind is open enough to perceive that a given policy is harming rather than serving self-interest, and self-confident enough to acknowledge it, and wise enough to reverse it, that is a summit in the art of government.”

I need to send Cyril a copy of the book for his inauguration.

Charlene Smith is a journalist and author of 14 published books about South Africa. She is Nelson Mandela’s authorised biographer and presently lives and works in Boston, USA.