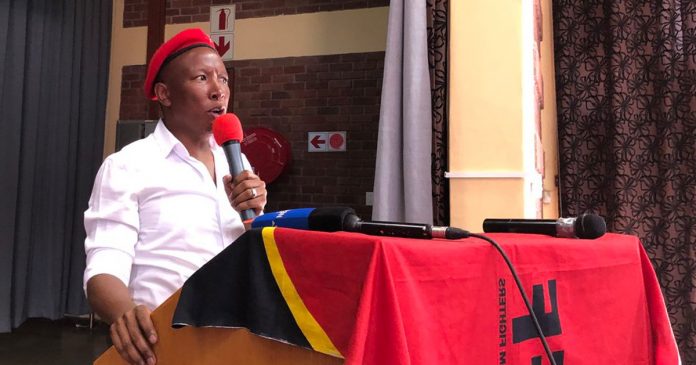 The DA said in a statement, issued Sunday, that it “strongly condemns the violence and vandalism” of H&M retail stores in Johannesburg by EFF (Economic Freedom Fighter) supporters over a “racist advert”.

DA National Spokesperson and Deputy Chairperson, Refiloe Nt’sekhe, said: “While we fully agree that racism is oppressive and has no place in a democratic South Africa, inciting violence and acts of destruction to property must be equally condemned.

“The EFF must be held accountable for all the damages incurred as a result of this deplorable vandalism and EFF leader, Julius Malema, must pay back the money for all damages incurred and compensate the employees who had to put in more hours clearing the mess.

“Trashing of stores cannot be condoned as it does not begin to topple the real elephant in the room – racism.

“This violent act clearly shows that the EFF is not genuine in their solidarity with the employees who now might face possible job losses in a country that is grappling with high rates of unemployment and stagnant economy.

“There are other effective and non-violent ways to fight institutional racism and destruction of property doesn’t even begin to solve the problem but compounds it.”

Malema said yesterday that “there’s no formula on how you should fight the oppressor” and that “we can’t be lectured by cowards on how to conduct revolution.”

He also warned “expect more action against all racists, individually and collectively this year“, and included the hashtag #Siyeza.

Malema appears to be on a mission to shake things up in 2018 (his Happy Revolutionary New Year is still pinned to the top of his Twitter feed) and accelerate economic equality for all in South Africa. Yesterday he seemed intent on inciting and galvanising his followers, referring to the H&M ‘Coolest Monkey’ ad as a deliberate attempt to “humiliate” black people. (While H&M were negligent and have apologised, it is not certain whether Malema is aware that the hoodies were created for children of all colours and that the term ‘monkey’ is used by parents around the world for their kids.)

After an international outcry, the offensive H&M advert had already been removed from all the fashion retailer’s channels, and the clothing withdrawn, by Wednesday 10 January 2018, days before the EFF went on the rampage.

Addressing the EFF Ground Forces in Polokwane on Saturday – at a meeting “convened to inspire fighters” – Malema seemed to further incite his ‘fighters’, saying: “We are not going to pay for any land because this land was taken from our people by force. And we’re not going to compensate the people who have committed a black genocide.”

He said: “We have occupied land successfully. We have expropriated land. We have never paid for any land.” (Watch the last 25 seconds in the video below.)

In other opposition news, the DA’s Federal Executive is meeting today to assess the facts and take a decision on the matter relating to the serious allegations against Cape Town Mayor Patricia de Lille.

We are not going to pay for any land says Malema

[WATCH] "We are not going to pay for any land because this land was taken from our people by force. We're not going to compensate the people who have committed black genocide" says EFF leader Julius Malema. Courtesy #DStv403

CIC @Julius_S_Malema now addressing the EFF Ground Forces in the Capricon Region. The EFF leadership met with the Bishop of ZCC, His Holiness Barnabas Lekganyane earlier today and due to being the region, a Ground Forces meeting was convened to inspire fighters. pic.twitter.com/SHNGyPk7Ar