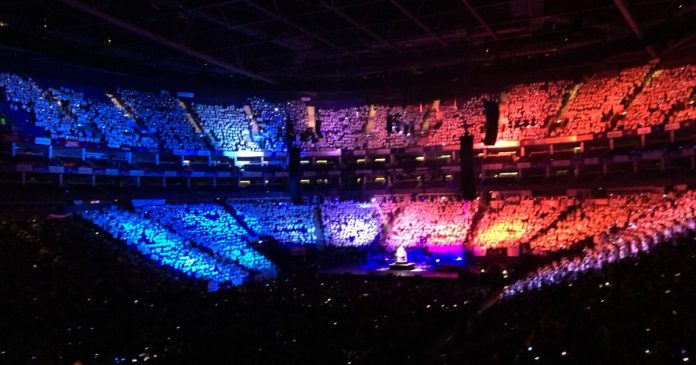 A South African expat’s video of thousands of children in the UK singing Toto’s “Africa” – which she uploaded for her friends in drought-stricken Cape Town – is going viral.

Kae Skinner Sera, who lives in the UK, uploaded the video late on Monday night after the Young Voices performance at the O2 in London earlier that evening.

She wrote: “Cape Town friends – tonight my grandson Riley was one of 7,800 children singing Africa at the o2 in London. Rain will be coming your way if these kids have anything to do with it. My eyes are watering already #proudgranny ❤❤❤ ”

Kae wasn’t at the show herself but her daughter (Riley’s mom) Steff sent her the video “as she was so emotional and it was so apt for the situation in Cape Town”.

She said the song just seemed so apt for what’s going on in Cape Town.

Her seven-year-old grandson knows about the drought and is apparently “happy that so many people have seen it and have sent such lovely messages and that they feel it’s helping them. He’s a lovely little boy.”

Since the video went viral another Capetonian grandmother has been in touch because her granddaughter was also in the choir.

Scottish-born Kae lived in Cape Town for 20 years and her eldest daughter and two of her grandchildren still live there… so “the drought is very much part of our lives… as family and friends are affected.”

Young Voices stages the largest children’s choir concerts in the world. “I’m sure they will be delighted that the 7,800 children’s voices have travelled so far and made such a difference,” said Kae.

If you’re a South African living abroad, watch all your favourite shows from home on Showmax – 14-day free trial!