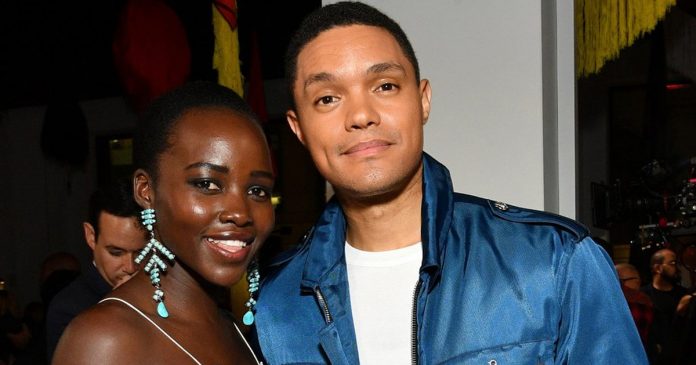 South African comedian Trevor Noah says he is “in heaven” since signing Hollywood star Lupita Nyong’o to star in and co-produce the movie based on his best-selling book ‘Born a Crime’.

She tweeted: “When I read @Trevornoah’s “Born A Crime,” I could not put the book down. Excited to announce that I will be starring in and producing its feature film adaptation!”

Oscar-winning actress Lupita will take on the role of Trevor’s beloved mother, Patricia, who is credited with giving Trevor his hard-working, humorous approach to life. In 2009, after she was shot in the head by Trevor’s step-father, her first words to Trevor were to joke that she was no longer the best-looking in the family!

Patricia showed her young son – growing up as the product of a ‘crime’ in apartheid South Africa, because his mother was black while Trevor’s father was white – that life is not a story of tragedies, but of triumphs. Many said the Daily Show host’s memoir was an ode to her.

The book – ‘Born a Crime: Stories from a South African childhood’ – was launched in 2016 and remained on the bestseller list for six months. It has also won multiple awards.

Trevor is co-producing the film through his Ark Angel Productions, together with Lupita and three partners in Mainstay Entertainment.

The next instalment of his memoir is due to be published on 13 November 2018.

When I read @Trevornoah's "Born A Crime," I could not put the book down. Excited to announce that I will be starring in and producing its feature film adaptation! #BornACrimehttps://t.co/v4AfGe23P5 pic.twitter.com/QvrsETIEAc

See photos of Trevor Noah with his mother and father growing up in South Africa.