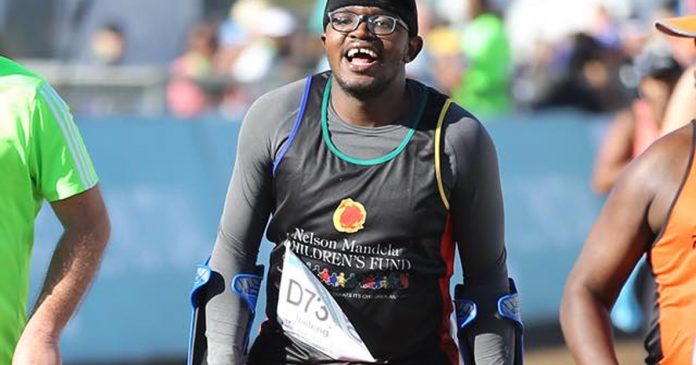 Writing on Facebook Dugmore captioned his story “My Two Oceans” and said: “I had a tough but eventually awesome Two Oceans. I clearly did not train enough and was battling from the start. Had to walk most of Southern Cross Drive.

“While running (very slowly!) near Kirstenbosch, I bumped into a member of Gugs Running Club, who was helping Ipeleng Khunou, by clearing the path in front for him.”

Ipeleng was born in Soweto with a rare brain deformity called Septo-Optic Dysplasia, which meant he essentially has no balance and his eyesight was also affected.

Ipeleng had bravely taken on the Two Oceans challenge to make history as the first runner on crutches to compete in the Marathon.

“He needed help [so] I then covered the back to keep runners from bumping his crutches,” said Dugmore.

“Between there and the finish he cramped up a few times very badly and had to lie down while we found salt, energy drinks and water.

“At one point a doctor actually helped to deal with the cramp and straighten his leg.

I have never witnessed such courage and determination.

“We all reached the finish together just before the cut off time. I have never witnessed such courage and determination.

“He collapsed at finish line. Myself and Nyaniso Qwesha from Gugs RC then took him to the first aid tent where he received massage treatment. Roger Sedres took this photo and shared.

“Ipeleng is from Rustenberg in the North West Province… He is 31 years old. Twelve years ago he weighed 121 kg and he decided to change his life by taking up running.

“Today he was running for the NM Children’s Fund to raise funds. This is a Two Oceans I will never forget. Faith. Discipline. Perseverance. The words of Ds Anthony from VGK Uniondale ring true. Salute Ipeleng Khunou – you are an incredible example to us all.

“(That’s me in [the] green shirt on his right clutching some super c sweets that someone had given us for Ipeleng) @Thanks to Roger Sedres for the pic.”

According to the Nelson Mandela Foundation, Ipeleng – who is fondly called ‘Crazy Legs’ by his peers – aspires to be a humanitarian and a philanthropist through his running… as he is currently the only runner on crutches. His dream is to raise awareness of disabilities and raise funds for the NM Children’s Fund. You can support his fundraising here: www.payfast.co.za/donate/go/nmcf

My Two Oceans today I had a tough but eventually awesome Two Oceans . I clearly did not train enough and was battling…

Runners World Magazine SA – “He gave it absolutely everything he had…”

Posted by SA-People – for South Africans in South Africa and expats on Saturday, March 31, 2018