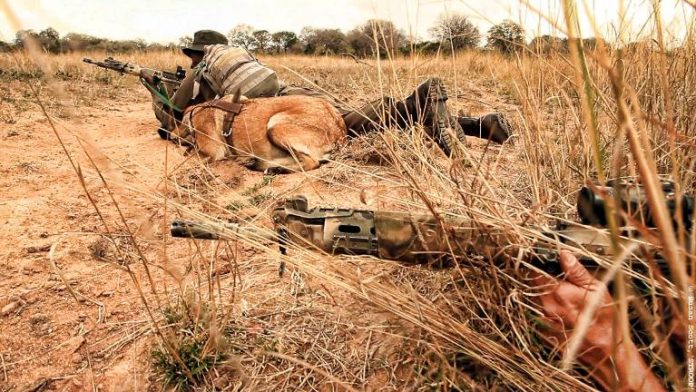 South African National Parks (SANParks) on Tuesday announced the arrest of two field rangers suspected of being involved in rhino poaching. The two suspects were based at the Houtboschrand section and are alleged to have shot and dehorned a white rhino in May 2018.

Stroop documentary filmmaker Bonné de Bod said: “This is not the first time rangers are implicated for the very thing they are employed to fight against.

“Corruption has infiltrated throughout the system, a key enabler in wildlife trafficking… but well done to the teams inside of Kruger for catching them!”

The suspects were arrested on Monday morning as a result of an intensive joint investigation carried out by the SANParks Environmental Crime Investigative Unit and the SAPS (South African Police Service).

Their arrest follows a report in May by tourists who heard shots, followed by a poached rhino carcass being found with its horns missing. The two suspects had been deployed in the area at the time of the reports.

The Managing Executive of the Kruger National Park (KNP) Glenn Phillips congratulated the investigating team on the arrests “we have a zero tolerance for corruption and criminality within our ranks and are very disappointed at some of our members who betray the trust of all South Africans and nature lovers, we want to warn others that we are coming after you” concluded Phillips.

The two suspects will be appearing in court in due course.

Meanwhile three poachers were arrested on Monday by Rangers who had been following suspect tracks for most of the day. The Rangers – who were supported by K9 and Airwing reaction teams – made the arrests shortly before last light. The suspects were in possession of a heavy calibre hunting rifle, poaching equipment and ammunition at the time of arrest. The suspects will be facing charges related to illegal hunting in a National Park.

DON’T MISS THIS WEEK ON CARTE BLANCHE: Exposing the suppliers and manufacturers of guns and bullets recovered at rhino poaching crime scenes. Unfortunately this episode will only be available in SA, but South Africans abroad can watch other episodes of Carte Blanche by subscribing to Showmax here (usually expats can watch the show on Tuesday, following Sunday night’s broadcast in SA).