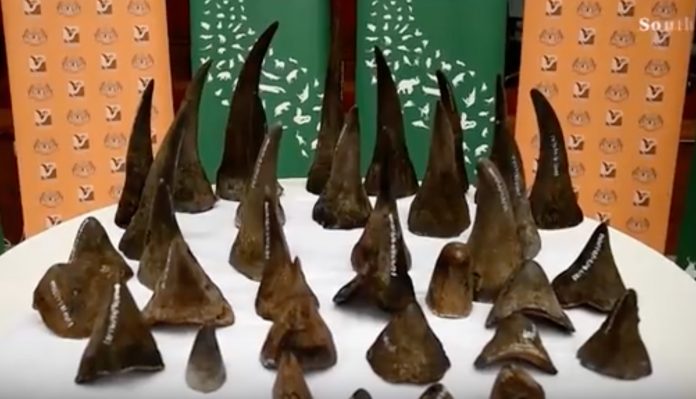 Wildlife experts say Malaysia is a major transit point for the illegal trafficking of endangered species to other Asian countries.

Officials acting on a tip-off seized 50 horns, weighing about 116 kg (256 lb), at the cargo terminal of Kuala Lumpur airport on Aug. 13, a wildlife official revealed in a statement.

The shipment also included nine carcasses of what are believed to be tigers and bears, weighing about 200 kg (441 lb).

“All the wildlife items confiscated were to be exported out of Malaysia without a proper permit,” Abdul Kadir Abu Hashim, the director-general of the Wildlife and National Parks Department, said in the statement.

The department will run DNA tests to identify each wildlife species involved, he added.

The shipment, valued at 48 million ringgit ($11.7 million), was bound for Hanoi, the capital of Vietnam.

Investigations showed the consignment had been shipped with false documents, and efforts were being made to identify its true owner, Abdul Kadir said.

TRAFFIC, a group which monitors the illegal wildlife trade, said the case highlighted links between Malaysia and Vietnam, which are both in southeast Asia.

“This was a very unusual mix of wildlife parts found — rhino horns which were clearly not from Asia and carnivore carcasses which could have originated from the country,” TRAFFIC’s acting Southeast Asia director Kanitha Krishnasamy said in a statement.

“This discovery raises questions about how criminals are accumulating wildlife parts and using a multitude of routes and methods to traffic them onwards to destination countries.”

Global trade in rhino horn is banned by a United Nations convention, but it is prized in some Asian countries as an ingredient in traditional medicines to treat everything from fever to cancer.

Last year, Malaysia seized about $3.1 million worth of rhino horns flown in from Mozambique via Qatar. Usually these rhino have been poached from South Africa.

In an episode of Carte Blanche in June, the current affairs programme joined forces with a United Nations arms expert in a special investigation that spanned three continents – Europe, Africa and Asia – to reveal the origin of weapons confiscated along the Kruger National Park’s border fence with Mozambique… and unmask the real architects behind the poaching of rhinos in Africa.