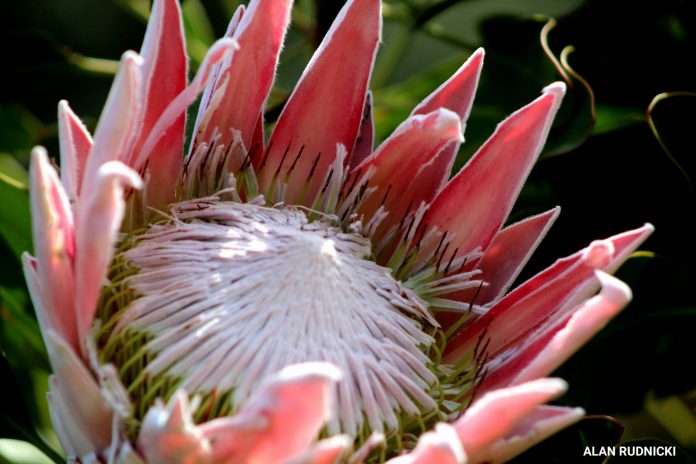 We often think of Proteas as being Proudly South African (afterall, the King Protea is South Africa’s national flower), but how many of you knew that they’re actually widely distributed throughout the southern hemisphere… in places such as Australia, Tropical Africa, South America, New Zealand, the Pacific Islands and Malaya? This family apparently dates back some 300 million years, writes Melanie Walker…

The delicate beauty of Serruria florida (Blushing Bride) justifies its recognition as the most beautiful of the genus. 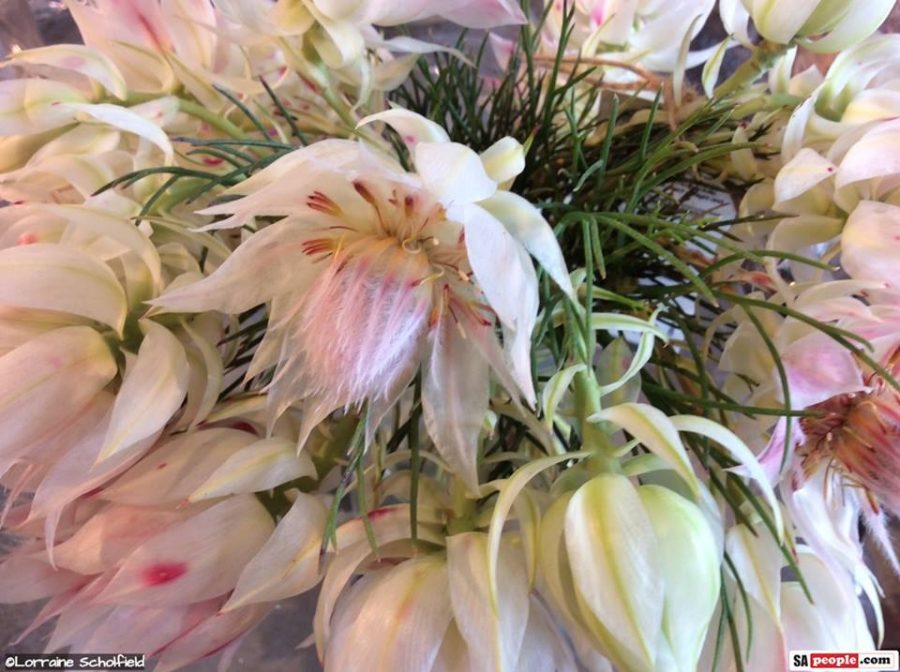 One of our most readily recognised indigenous plants, the Protea is divided into two subfamilies:

While there are about 80 general and 1600 species worldwide, South Africa only comes in in second place in diversity, with Australia home to 800+ species, and Africa recording to date 112 species. 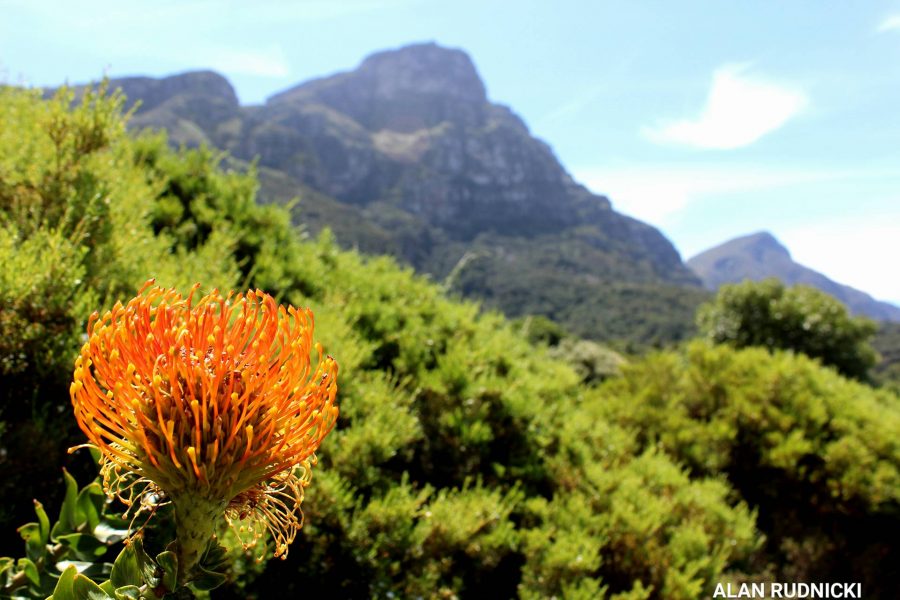 We have a total of 14 genera of ‘sugarbushes’ (all exclusive only to Africa, with none of them growing anywhere else in the world) and 361 native species, mainly in fynbos, with 92% of them occurring only in the Cape Floristic region (that narrow belt of mountainous coastal land from Clanwilliam to Grahamstown according to Wikipedia, for those of you who were wondering where it’s situated).

Add to this two genera and six species which have become naturalised, and an additional 13 genera and 49 species which are cultivated in the region, we can probably still lay claim to being the land of Proteas – and certainly, have the most beautiful!

The King Protea – or Protea cynaroides – is a distinctive member of Protea because it has the largest flower head in the genus. The species is also commonly known as giant protea, honeypot or king sugar bush. The King Protea can be found in the south-west and southern parts of South Africa in the fynbos region.

The Madiba Protea is a smaller version of the King Protea. It’s a beautiful reddish pink colour and is almost 20% smaller than the traditional Cyranoides variety. The flower has been named after Nelson Mandela’s tribe. 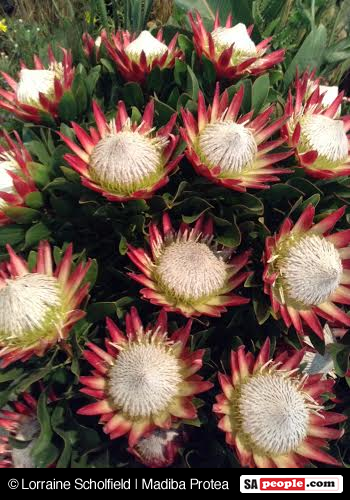 Protea magnifica has the second largest flower head after P. cynaroides. The Queen protea is one of the most attractive and sought after varieties. This strikingly beautiful and fluffy variety  with its naturally varying flower head colour and rounded bushy form, looks great in any garden environment.

Representing in local tradition change and hope, and named after the Greek God Proteus who had the ability to take on any shape he wanted, this genus was named in 1735 by Linnaeus – the Swedish botanist and ‘Father of modern taxonomy’ who formalised binomial nomenclature.

Protea compacta is similar to Protea eximia. Its distribution is from the Kleinmond to Bredasdorp Mountains and is one of the best known proteas in the cut flower industry. Its leaves curve upward. The Bot River sugarbush is ideally suited to the larger coastal fynbos gardens where, if planted en masse , it will provide a pink or white splash of colour for most of the year.

Protea aristata would surely be among the five best-known South African proteas, even though it had a rather late documented discovery in the 1920s. Its new found fame is largely owing to its stunning crimson-pink flowerheads, needle-like foliage and neat form. It could prove to be a future favourite amongst indigenous gardeners, as it is water-wise, considering increasing water scarcity in South Africa.

There has also been a fair amount of hybridisation over the years, with some great new shapes and colours coming into play. One that is fairly well known overseas is Lady Di – Protea compacta x magnifica-  named for the late Princess of Wales, a beautiful pink Protea flowers topped with a white fringe which grace these plants from early winter to spring. They are stunning in the garden and in flower arrangements. Ideal for low maintenance, low water use gardens.

So that’s a lot of plants in one genus then! And with the wide variety available, you’re bound to find one to suit the climate you live in, in South Africa. Sadly, up to 14% of the species are in danger of extinction and listed in the UICN Red Book, so if you’re going ‘foraging’ in the wild, do leave them alone and rather buy your plants from reputable dealers.

By the way, last year, South Africa exported more than 3 million proteas, with the EU and Russia receiving half of them. And our most exported variety is the Blushing Bride with 1.1 million stems going abroad.

The Blyde protea (P. laetans) is a small tree with bluish-green foliage and deep carmine flowerheads, and is one of the few proteas that are found in the summer-rainfall areas of South Africa.

Although not as eye-catching as the glorious king protea (Protea cynaroides), Protea mundii (forest sugarbush) is fast growing, small white to pale cream-coloured variety with petite quick flowering flowerheads, tolerant of a variety of soil types, generally quite tough and a host to many nectar feeding birds and bees.

Protea caffra (Common protea) – is one of three proteas which occur in the Witwatersrand area.

A fast-growing protea, P. longifolia, the long-leaf sugarbush, which is easily recognized by its extended central mass of flowers with black-bearded tips, and various flower colours of yellow-green, creamy white and light orange-pink, and makes an excellent, small, spreading fynbos shrub for the garden.

Protea scolymocephala (Thistle Protea) is a dainty shrub bearing abundant pink-tinged, creamy-green flowerheads in winter/spring, ideal for small gardens on the sandy flats. One of the best known, most easily available online is ‘Starlight’  which has masses of dainty flowers and a perfect choice for smaller, low maintenance, low water use gardens.

Protea roupelliae subsp. hamiltonii is a dwarf, sprawling shrub which works well in a rockery or grassland garden. Its magnificent cream and pink flower heads last for about three months in summer. It’s also a good choice for gardeners in the summer rainfall area that struggle to grow fynbos proteas.

Protea neriifolia (Oleander-leaf protea) is an excellent plant for the garden and an outstanding and long lasting cut flower.

With its long history and good looks, Protea nitida (wagon Tree) is a gem in the fynbos world. It is the only Protea species to form large trees yielding usable timber.

One of the ‘true’ varieties, the Common sugarbush – P. repens –  is an excellent addition to any wildlife-friendly garden as a large amount of nectar produced by the flowers attracts birds, bees and other insects.

Protea curvata (Serpentine sugarbush) is a species of plant in the family Proteaceae. It is endemic to SA and is now a protected plant. 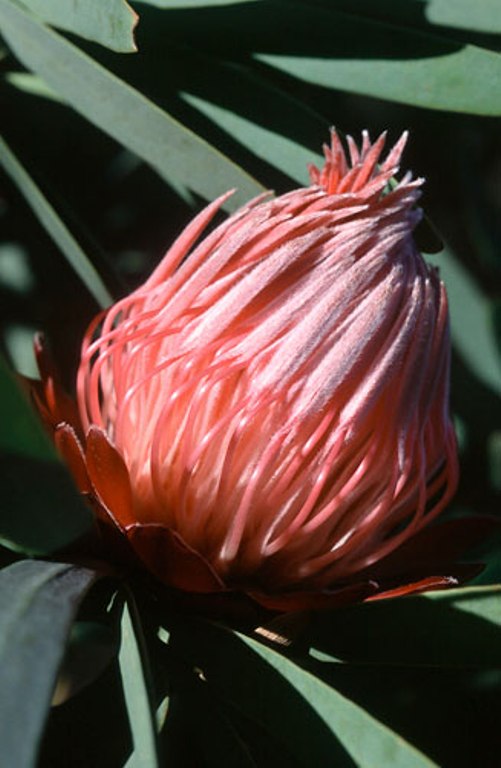 Then, amongst those not given a genus name: 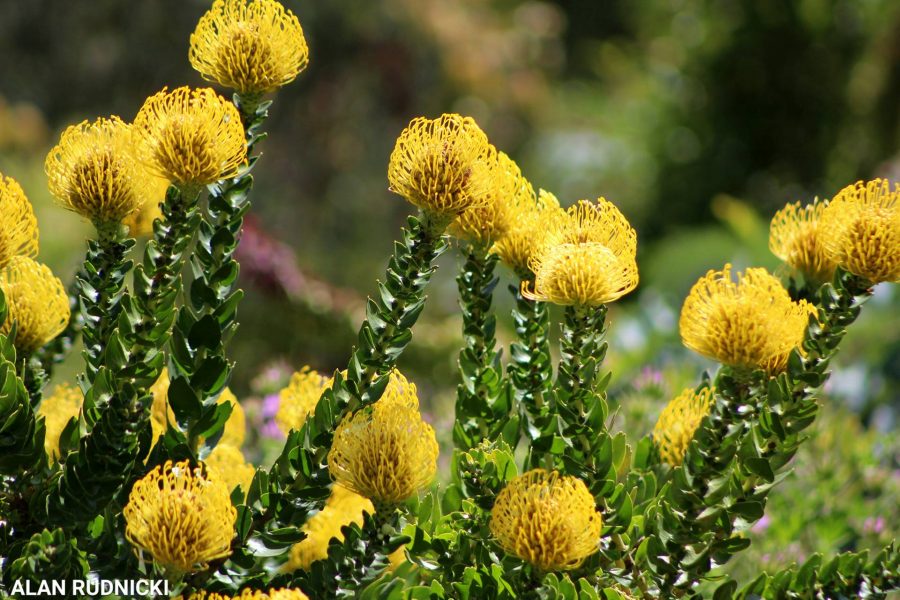 Breathtaking. TY Nigel Riley – "To those who have not seen it, feast your eyes on the King Satin White Protea." The beautiful South African flower is destined for the export market. Nigel says: "They harvest it closed, pack and fly it out across the world. The flower then opens that side…"#beautiful Stellenbosch #beautiful Cape Town

Posted by SA-People – for South Africans in South Africa and expats on Friday, August 31, 2018

Look out for GARDEN STYLE by Melanie Walker and Connall Oosterbroek, published by Jonathan Ball, and available in bookstores at the end of October.