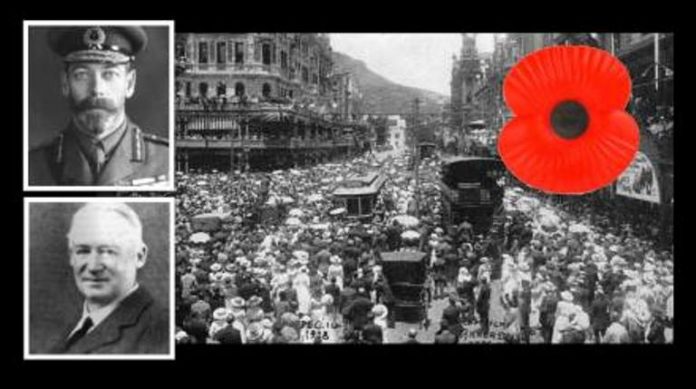 Many people do not know that the two minutes silence and its association to Armistice Day (11th hour of 11/11) or Remembrance Sunday has a South African origin. It is one of our greatest gifts to humankind, yet most South Africans are completely oblivious of it… writes Peter Dickens. 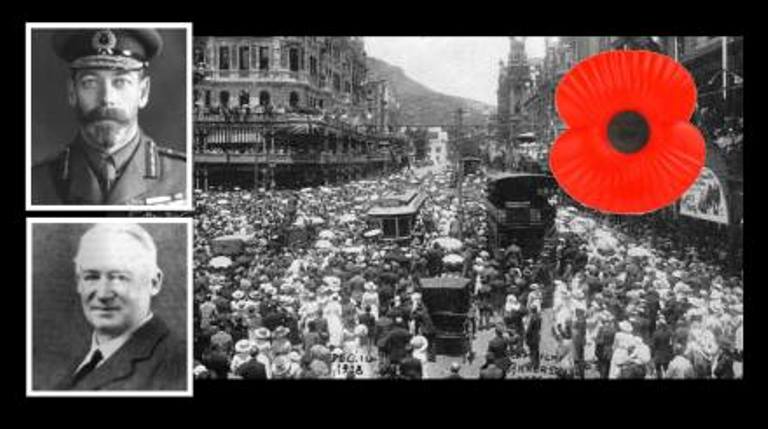 The featured image above, taken in 1918, is a rare and unique one, it shows South African civilians stopping what they are doing in the middle of Cape Town and standing to attention for two minutes silence, signalled when the noon day gun was fired.

Not common today in Cape Town but a daily occurrence during war years.

So how did this unique practice become a worldwide standard for remembrance?

Read on and learn a little why South Africans should stand proud of what they have given the world; when on Remembrance Sunday and on Armistice Day in November, the Western World stands silent in remembrance for two minutes … and take heart that this entire ceremony has South African roots.

At 05.30 in the morning of 11 November 1918 the Germans signed the Armistice Agreement in a remote railway siding in the heart of the forest of Compiègne. Soon wires were humming with the message : ‘Hostilities will cease at 11.00 today November 11th. Troops will stand fast on the line reached at that hour…’.

Thus, at 11.00 on 11 November 1918 the guns on the Western Front in France and Flanders fell silent after more than four years of continuous warfare, warfare that had witnessed the most horrific casualties.

World War One (then known as the Great War) had ended.

The time and date attained an important significance in the post war years and the moment that hostilities ceased became universally associated with the remembrance of those that died in that and subsequent wars and conflicts.

The Two Minutes silence to remember all who paid the supreme sacrifice was a result of this expression… and it all began in Cape Town, South Africa.

When the first casualty lists recording the horrific loss of life in the Battles of the Somme were announced in Cape Town, Mr JA Eagar, a Cape Town businessman, suggested that the congregation of the church he attended observe a special silent pause to remember those in the South African casualty list.

It was the church also attended by Sir Percy Fitzpatrick the famous South African author of “Jock of the Bushveld”.

In May 1918, the Mayor of Cape Town, Councillor H. Hands (later Sir Harry Hands) at the suggestion made by Mr. RR Brydon, a Cape Town City Councillor, in a letter to the Cape Times initiated a period of silence to remember the events unfolding on the battlefields of Europe and the sacrifices being made there.

The pause would follow the firing of the Noon Gun (a tradition instituted in 1902 and fired everyday at 12:00 from Signal Hill), simply put the gun was the most audible signal with which to co-ordinate the event across the city of Cape Town.

The boom of the gun signalling the midday pause of three minutes was heard for the first time on 14 May 1918. It became the signal for all activity in the Mother City to come to a halt.

Everything came to a dead stop while everyone bowed their heads in silent prayer for those in the trenches in Flanders.

As soon as the city fell silent, a trumpeter on the balcony of the Fletcher and Cartwright’s Building on the corner of Adderley and Darling Streets sounded the Last Post, the melancholy strains of which reverberated through the city. Reveille was played at the end of the midday pause.

Articles in the newspapers described how trams, taxis and private vehicles stopped, pedestrians came to a halt and most men bared their heads. People stopped what they were doing at their places of work and sat or stood silently. The result of the Mayor’s appeal exceeded all expectations.

One journalist witnessing the midday pause described a young woman dressed in black, who came to a halt on the pavement and furtively dabbed at her eyes with a handkerchief. “One could not but wonder what personal interest she had in the act of remembrance”, he wrote.

A few days later Sir Harry, whose son, Capt Richard Hands, a member of ‘Brydon’s Battery’, had been mortally wounded in the same battle in which Maj Brydon had been killed, decided to shorten the duration of the pause to two minutes, “in order to better retain its hold on the people”.

In terms of the meaning of “two minutes” it was also argued that the first minute is for thanksgiving for those that survived war and the second minute is to remember the fallen.

There is even an eye-witness account of the midday pause in 1918 which eloquently outlines the event – see the Observation Post story on it by following this link: The 2 minutes silence; an eye witness account of South Africa’s unique gift to Remembrance

The midday pause continued daily in Cape Town and was last observed on 17 January 1919, but was revived in Cape Town during the Second World War.

Below is another rare photo of soldiers and civilians paused and standing at attention for two minutes of silence on Cape Town’s streets in 1942.

Today, the tradition of the midday gun has continued, as any Capetonian can attest – regular as clockwork it goes off at 12:00, and although the pause is no longer part of the ritual in Cape Town, the idea of the ‘pause’ for two minutes remembrance has survived.

That this ritual survived is by no means in a small way either, but in such a way that it now concludes how we as modern human beings in the western world remember the war dead and sacrifice.

It started when it became the official two minute ‘pause’ throughout Britain and the British Commonwealth from 11 November 1919, and here is how that came about, and once again – surprise – we have a South African from Cape Town right at the centre of it.

Now, back to Sir Percy Fitzpatrick. He had been impressed by the period of silence kept in his local church after the horrific loss of life at Delville Wood became known and the casualty lists had been read out.

He had a personal interest in the daily remembrance as his son, Maj Nugent Fitzpatrick, battery commander of 71st Siege Battery, was killed on 14 December 1917 by a chance shell fired at long range.

Sir Percy was understandably deeply affected by the loss of his favourite son and was also so moved by the dignity and effectiveness of the two minute pause in Cape Town that the date and time of the Armistice inspired him to an annual commemoration on an Imperial basis.

Sir Percy then wrote to Lord Milner and described the silence that fell on the city of Cape Town during this daily ritual. Taking into consideration that the guns of war finally fell silent at 11:00 on the 11th day of the 11th month (November), Sir Percy felt that the idea of observing the two-minute silence at that time and on that date, would give the Act of Homage great impact, and proposed that this became an official part of the annual service on Armistice Day.

The meaning behind Sir Percy’s proposal was stated as:

It is due to the women, who have lost and suffered and borne so much, with whom the thought is ever present.
It is due to the children that they know to whom they owe their dear fought freedom.
It is due to the men, and from them, as men.
But far and away, above all else, it is due to those who gave their all, sought no recompense, and with whom we can never re-pay – our Glorious and Immortal Dead.

Sir Percy’s letter was received by Lord Milner on November 4, 1919, reviewed and accepted by the War Cabinet on November 5, and was immediately approved by King George V.

George V, then King of the United Kingdom, shortly afterwards on the 7th November 1919, proclaimed by decree.

“Tuesday next, November 11, is the first anniversary of the Armistice, which stayed the worldwide carnage of the four preceding years and the victory of Right and Freedom. I believe that my people in every part of the Empire fervently wish to perpetuate the meaning of the Great Deliverance, and of those who laid down their lives to achieve it.

To afford an opportunity for the universal expression of their feeling, it is my desire and hope that at the hour when the Armistice comes into force, the eleventh hour of the eleventh day of the eleventh month, there may be for a brief space of two minutes, a complete suspension of all our normal activity… so that in perfect stillness, the thoughts of everyone may be concentrated on reverent remembrance of the glorious dead.”

Sir Percy when he heard the news that his suggestion had reached the King stated:

“I was so stunned by the news that I could not leave the hotel. An hour or two afterwards I received a cable from Lord Long of Wexhall: ‘Thank you. Walter Long.’ Only then did I know that my proposal had reached the King and had been accepted and that the Cabinet knew the source.”

Later, Sir Percy was thanked for his suggestion of the two minute silence by Lord Stamfordham, the King’s Private Secretary who wrote:

Dear Sir Percy,
The King, who learns that you are shortly to leave for South Africa, desires me to assure you that he ever gratefully remembers that the idea of the Two Minute Pause on Armistice Day was due to your initiation, a suggestion readily adopted and carried out with heartfelt sympathy throughout the Empire.
Signed – Stamfordham

And so the tradition of 2 minutes of silence during remembrance occasions was born, a unique South African gift to world, a simple peaceful gesture that in deep solitude remembers the end of all war – not the beginning. 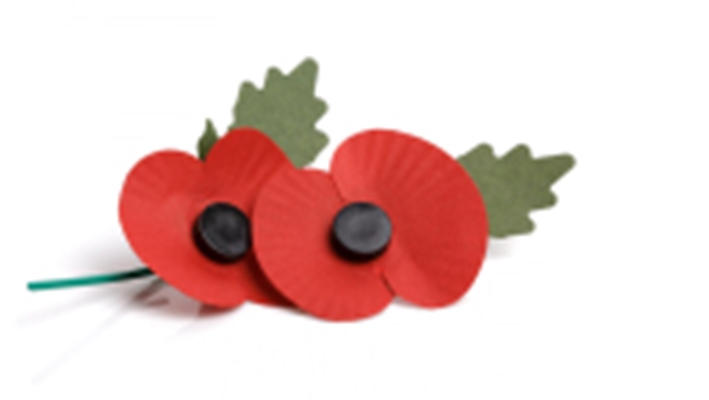 Image copyrights include The Imperial War Museum and “The Celebration of Peace” Booklet, issued in 1919 by the Cape Town Peace Celebrations committee for distribution throughout the Schools of the Cape Peninsula.