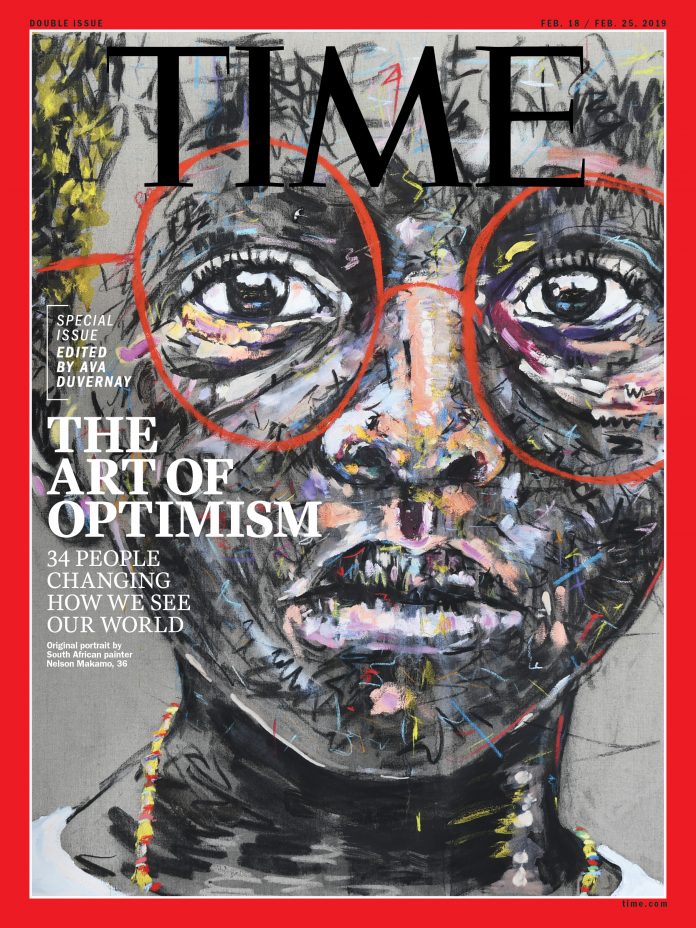 For the best part of a decade, South African artist Nelson Makamo has had a deal with his 11 year-old cousin, Mapule Maoto. He pays for her studies, and she agrees to model for his colorful paintings. Today, with fans all over the world praising his work, including the likes of Oprah Winfrey, it’s turned out to be a pretty good deal.

The latest painting that Mapule has inspired is Makamo’s cover for TIME’s 2019 Optimists issue, guest edited by filmmaker Ava DuVernay. Optimism is a natural fit for Makamo’s work, which has for several years largely focused on young children from rural South Africa. “Later on in life we sometimes forget there’s beauty in being a human being,” he says, speaking from his home in Johannesburg. “But children are just discovering that.

When TIME first approached Makamo to contribute to the issue, he had never produced a magazine cover before. He was eager to create an image that would introduce his work to the world, he says. “It scared me because, even though I’ve been working for a long time, it felt like a debut.”

Makamo, 36, knew very quickly that he wanted a fairly simple image of a child, “something everyone can relate to.” But beyond the initial idea, he doesn’t like to plan his works, and often returns to them to add tweaks long after they might be considered “finished.” After spending three or four months on this painting, he had to stop working. “It was the first one where I really had to force myself to say: OK this is finished now. I’m very critical,” he says of sending the image off to TIME. The final piece, an oil painting on canvas, is titled “Vision of a limitless future.”

Makamo had been in contact with TIME guest editor DuVernay since 2017, when the filmmaker bought one of his pieces at auction. In December, she visited his studio in Johannesburg and purchased another.

The children (and few adults) that populate Makamo’s award-winning charcoal drawings and colorful paintings are drawn from his interactions with Mapule and others in his life, he says. “But I’m not really focused on trying to portray them as they are. When I look at someone, the moment I’ve seen them can feel so beautiful. I want to capture that moment on a canvas.”

Makamo grew up in a small town in South Africa’s northern Limpopo province. His artistic impulse kicked in early. “I just had this urge to draw, to make marks,” he says. That desire grew stronger when he got into comic books, and then works by Van Gogh and Picasso. But it was discovering African artists that really made him fall in love with art, he says.

Visual artist Dumile Feni was a major influence, and inspiration, for Makamo. Feni grew up in a poor family in apartheid-era South Africa before going into self-imposed exile in the U.S. and U.K. from 1968 until his death 23 years later. Much of his work focused on the struggle back home, with dark and sometimes disturbing drawings, mostly done in black and white. “My work is completely different to his, stylistically,” Makamo says. “But he’s important to me because I needed to see there was someone who was able to put out an amazing body of work despite living in really tough times.”

Makamo says he no longer thinks of himself as “an African artist,” as he did when starting out. He’s invited to an ever-increasing number of international art fairs in Europe and the U.S., where artists from all corners of the world are shown side by side. And, with the rise of Instagram — which he updates frequently — Makamo can show his work to anyone he wants, at any time. “That’s one of the exciting developments I’ve seen in the art world since I started,” he says. “There’s no longer really that line between the South American Artist, the European Artist, the African Artist.”

Makamo’s fans around the world know him for his images of children. But having spent years on the subject, and with Mapule now becoming a teenager, he says it will soon be time to try something new. “I could look for a new model, I could keep doing the same thing,” he says. “But if she is growing, maybe I should grow too.”