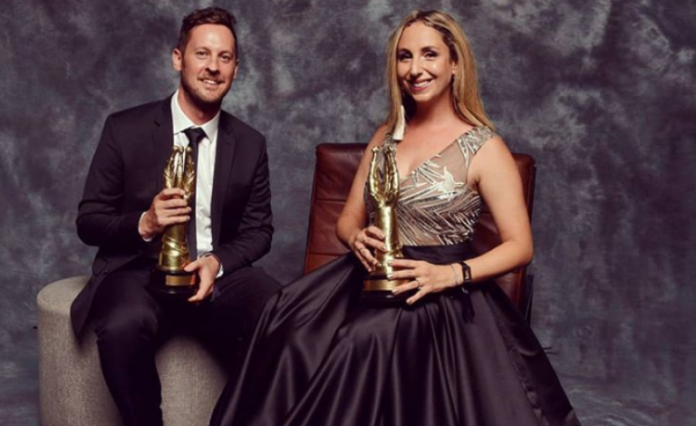 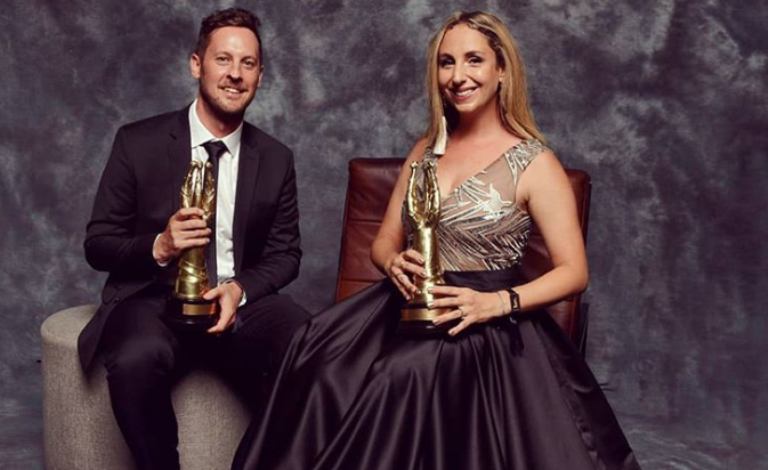 The 5 awards made Showmax the most awarded broadcaster in the TV comedy category and marked the first time a streaming service had won at the SAFTAs.

“When we were making Tali’s Wedding Diary, we joked about winning a SAFTA – it seemed totally crazy given it was our first fully-fledged Showmax Original and all of us were learning as we went,” says Candice Fangueiro, head of content for MultiChoice Connected Video.

“Fast-forward and we’re on stage not just winning one SAFTA award but taking home five. I’m still pinching myself.”

Tali’s Wedding Diary is a mockumentary that follows Tali, a self-obsessed Joburg princess who’s moved to Cape Town and is planning her wedding to property-agent fiance Darren (Anton Taylor).

The series was inspired by Julia’s own wedding to Ari, her SuzelleDIY and Tali’s Wedding Diary co-creator.

The week before the SAFTAs, Talis’ Wedding Diary reached another milestone: the comedy topped one million views on Showmax.

“Julia and Ari have been amazing partners in bringing to life a character who South Africa has come to love,” says Candice.

“Tali’s become bigger than we ever could have expected and this gives us the confidence and appetite to get out there and tell more stories. I’m really grateful to everyone involved – what an incredible outcome.”

Fans have been asking for a sequel ever since the show aired. While no official announcement has been made, Ari did hint on his Instagram account that another season could be on the cards.

After thanking everyone involved and everyone who watched and supported the show, he ended, “Let’s hope this recognition allows us to make the next chapter.”

Well if anything this weekend confirmed that it feels really good to win stuff. We are beyond excited that Tali's Wedding Diary received five SAFTA awards! Best Editing ✂️ Best Cinematography 📽 Best Actress 👸 Best Director 🤴 Best Show 💎 I'm so grateful to everyone who worked with us on this special show. From our hardworking crew to our talented cast and super efficient production team. We really missed having everyone with us last night at the awards, I wish you guys could all have been there to go up on stage. Especially our cast Anton Taylor (@iamantontaylor) Glen Biderman-Pam "Rael! Rosen!" (@glenbidermanpam) Lara Lipshitz (@lara_adine) Kate Normington (@katenormington1) Sister Stephie (@dudleyroad) and Guy de Lancey (@gift.dog) Sun City wasn't the same this year without our extended Sketchbook fam @nataliasegerman @joshuatrappler @willyballs @lanebotha and @nuroticktales — "We missed you guys!!" Luckily @keren.setton pulled thru though 😀 Well done again to James Adey (@james_adey_sasc) for nabbing a well deserved cine award and to Richard Starkey Scissorhands (@ringostirfry) for claiming the editing trophy 🏆 Special shout out to our secret weapon Daniel Zimbler (@zimbleband) whose genius storytelling mind guided us through a daunting writing task. Also a shout out to Kam Nurock (@nuroticktales) for producing the hell out of this show! Thanks again to the team at Showmax, Candice (@candice.fangueiro), Shaamila and Akash for allowing us to bring Tali to life, supporting us while giving us the creative freedom to do our thing 🙏 I also couldn't end this off without a special mention to my beautiful wife and creative partner Julia. I'm so lucky to be able to work alongside you and have regular access to your creative mind and comedic instincts. Everything about my life is so much better because of you 💙 Thanks also to everyone who watched and has supported this show. Let's hope that this recognition allows us to make the next chapter in the Tali-verse 🤞 #talisweddingdiary #saftas13 #showmax #talibabes

In addition to Tali’s Wedding Diary, Showmax is also the only place you can stream a number of the other big winners, including:

Binge Tali’s Wedding Diary first and only on Showmax:
https://www.showmax.com/eng/tvseries/dqv89awk-talis-wedding-diary