The Electoral Commission has reminded all voters, who wish to cast their ballot in the national elections outside of South Africa, that they have just one week left to apply. 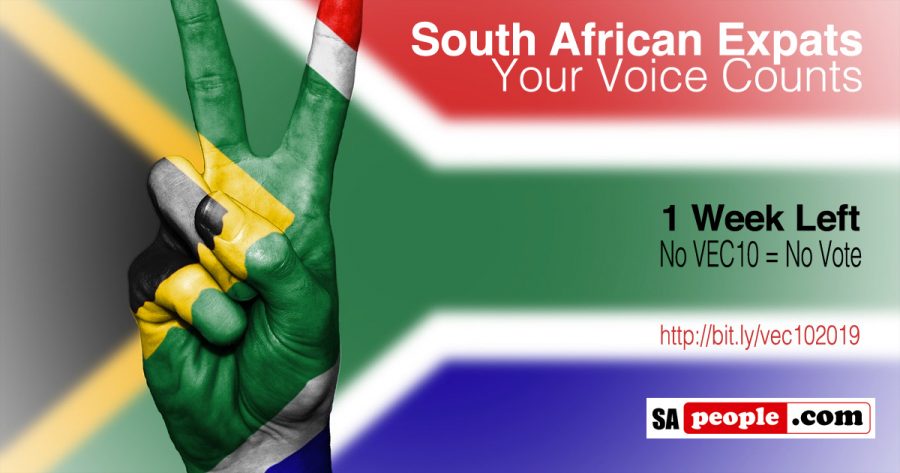 In terms of the election timetable published last week, registered voters have until 11:59pm on 13 March 2019, to apply and notify the Chief Electoral Officer of their intention to vote at one of South Africa’s 121 foreign missions.

The commission reminded voters that voting outside of the country is scheduled for Saturday, 27 April 2019, at South Africa’s foreign missions.

“This is to allow for the secure transport of completed ballot papers back to the national office of the Electoral Commission, where they will be counted in front of party agents and added to the national ballot count once polling closes on 8 May 2019,” the commission explained.

The IEC has simplified the overseas voting application process since the 2014 national elections.

In 2014, voters who wished to vote abroad, were required to first notify the Chief Electoral Officer of their intention to vote abroad and then, on voting day, complete an application form before voting.

These two processes have now been combined in the VEC10 process, which should significantly reduce the time taken to vote on 27 April 2019.

Registered voters can apply by completing and submitted a VEC10 form via the website https://www.elections.org.za/ieconline/Notify-the-IEC-of-my-intention-to-vote-abroad.

Any South African citizen who is registered to vote and is 18 years old on 8 May 2019.

2. How do you apply to vote abroad?

Registered voters need to complete and submit an online VEC10 application on www.elections.org.za by no later than 23h59 on 13 March 2019.

3. What happens after you submit the VEC10?

Once you have submitted your VEC10 online, voters will immediately receive an SMS or email notification confirming their submission and the foreign mission at which they will vote.

4. Where and when does voting abroad take place?

A full list of South Africa’s missions is available on the website of the Department of International Relations and Cooperation (DIRCO) at www.dirco.gov.za/webmissions/index.html

5. What do voters need to take with them to vote?

Voters will need to take their South African identity document (ID) – either a green barcoded ID book, smart ID card, or valid temporary ID certificate and their valid South African passport. Both documents are essential. Only original documents can be accepted – no copies.

6. What happens when you cast a special vote abroad?