South African Justin Harding claimed his maiden European Tour title with a six-under-par 66 in the final round of the Qatar Masters to win by two strokes at the Doha Golf Club on Sunday.

Harding made three birdies in the first four holes and birdied three of the final four to finish 13 under par, ahead of nine other golfers who finished 11 under.

South Korea’s Choi Jinho ended the final round with a stunning eight-under-par 64 but could not reel in Harding.

“It was nerve-wracking, especially coming off. It’s a situation I haven’t really been in,” said Harding, who bogeyed the sixth and seventh holes.

“I didn’t enjoy it but it’s good fun, I’m glad it happened and now we move on. I’m looking forward to seeing what happens going forward and playing in some bigger events.”

England’s Oliver Wilson, who had a one-shot lead after the third round on Saturday, also finished tied for second place, two strokes behind.

Harding is the fifth South African to win the event after Darren Fichardt, Ernie Els and Retief Goosen plus Branden Grace, who won back-to-back titles in 2015 and 2016.

(Reporting by Rohith Nair in Bengaluru; editing by Clare Fallon) 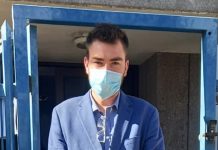