Johannesburg is famous for having one of the largest urban forests in the world, but now the South African city faces losing much of that extraordinary and beautiful 10-million tree canopy as a tiny beetle threatens to cause one of South Africa’s largest ecological tragedies. ‘Garden Style’ author Melanie Walker reports on the current crisis, and offers tips for residents…

Sometime in 2017, Dr Trudy Paap of FABI (Forestry and Agricultural Biotechnology Institute) at the University of Pretoria, while conducting a routine study for diseases in the KwaZulu-Natal (KZN) Botanical Gardens in Pietermaritzburg, South Africa, discovered a beetle that seemed to be wreaking havoc with the trees there… writes Melanie Walker.

Since then, this tiny little 2mm or smaller pest, the Polyphagus Shothole Borer (Euwallacea whitfordiodendrus (Schedl 1942) = the species in South Africa – although I personally prefer the fornicatus version – pretty much says it like it is nê?) has been making its presence felt around the country.

It has been identified in trees as it quickly spread from KZN to Knysna / George, Bloemfontein, Johannesburg and the greater Cape Town Region, threatening not only exotics lining our streets – many of which have become entrenched in our Heritage, such as our large urban forest in Joburg, and the stately oak trees of the winelands – but also our indigenous varieties.

Coming from South East Asia (as its common name, the Vietnamese borer would tell you) where the trees have built up something of an ‘immunity’ to the little blighter, it has been found decimating not only forest trees in places like Israel and California, but also food crops.

The major challenge with the beetle infestation is that the insect is crossing the boundaries between agriculture, commercial forestry, natural forests, and urban trees.

Never in South Africa’s history has any insect attacked and killed trees in all these sectors.

According to one report, although arborists are finding more trees are being hammered, of the 80 species of trees under attack in South Africa, about 20 are reproductive hosts in which the beetle inoculates its fungus and then multiplies.

These trees pose a serious risk to the environment around them as they become a source of infestation.

In the remaining 60 host species the beetle also inserts the fungus, but it doesn’t reproduce in them. Although some of these trees may eventually die, they don’t pose a threat to the other trees around them.

The scary thing is at the moment, there’s precious little you can do to heal an infected tree, or stop your tree from being infected.

As it’s a fungus which the beetle brings into the tree – on its back to provide itself with food – that is actually doing the damage by targeting the tree’s vascular system, inhibiting the flow of water and nutrients within the tree, spraying insecticide won’t be particularly useful.

And neither will spraying your tree with homemade remedies containing things like eucalyptus oil, which won’t make it down the tiny little holes – even if it will go some way to making the street smell pretty….

Arborist and tree surgeon, Julian Ortlepp, owner of tree-care company TreeWorks, has been trying to rid trees of the beetle by injecting systemic treatment directly into trees, but as he has told me, there isn’t a sure-fire solution just yet.

Although he’s been looking into a treatment being developed  by Pan African Farms which sounds “promising”, as it is sprayed on to the surface of the tree and penetrates the tree using lipids. In the laboratory the trials have been quite successful. For this we will have to wait and see as it is pending emergency registration before it can be used on actual trees.

And at the time of writing, precious little help can be expected from Joburg City Parks and Zoo (JCPZ) when it comes to having infected/dead trees removed and taken away.

Mainly because they’ve been a tad disingenuous in downplaying the scale of this coming disaster, saying that they reckon that we’re at the tail end of the infestation, and that they have seen some trees managing to fight off the horrible nunu.

And also because frankly, there’s nowhere for the trees to be taken and contained and for the beetle to be destroyed.

At the local level, municipalities have never had to deal with a problem like this, are not equipped to deal with it, and it seems will need clear and practical guidance from the national departments.

But this isn’t what this piece is about. It’s about how YOU can do something about it. After all, TISA (yep, This Is South Africa) so if you want something done, best you do it yourself!

After all, if nothing is done, we stand to lose up to 30% of our tree canopy in Johannesburg, according to Andrea Rosen of JUFA (the Johannesburg Urban Forest Alliance).

So, how do you identify an infected tree?

As the beetles are too small to detect, you’ll have to check for symptoms of infected trees, which vary from one tree species to another. Some of these signs are: 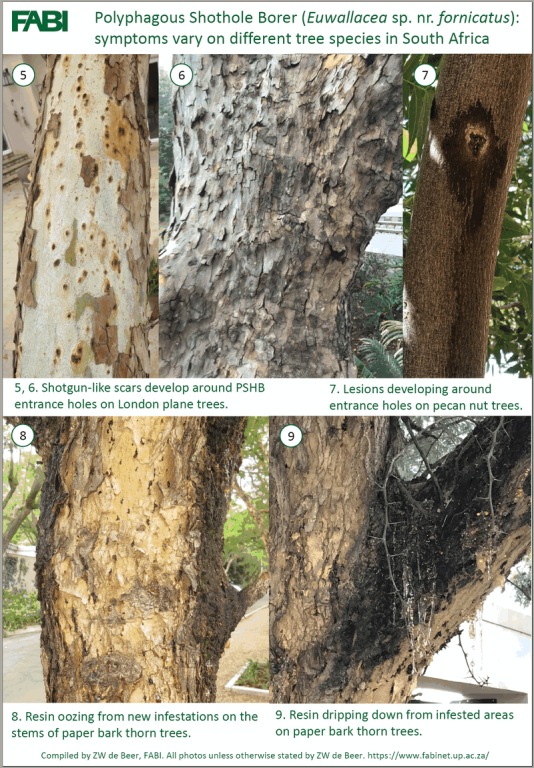 Here’s what you can – and should be doing – if you notice trees on your property or on the streets that have been affected:

Make your tree as healthy as possible!

A stressed tree suffers from a diminished immune system, which can inhibit its capability to resist insect attack. Boost your tree’s natural defence by:

A local nursery will be able to provide information on all of the above options.

This is going to be the most important activity after reporting. Julian Ortlepp is currently coming up with a list of trees which are deemed ‘safe’ and will be posting it on all possible platforms and social media.

Go out and get one – or six. Don’t wait till the tree on your pavement is dead or removed. Start now.

Many concerned private companies, arborists and learning establishments are working with groups overseas and sharing ideas and possible remedies to try and avert this disaster. And it needs to happen. Judging by the number of trees the beetle has killed in Johannesburg as well as Knysna, this beetle could potentially be one of South Africa’s largest ecological tragedies.

If you have decided to go the poison route, please bear the following in mind:

WHAT TREES ARE BEING INFECTED?

Here’s a list of trees which have been identified in South Africa as having been infested. (And by the way, sometimes the borer may try a tree, leaving its distinguishing marks, but decides it doesn’t like it and goes to feast elsewhere. Alas, jacarandas are seemingly exempt from this bad behaviour, but that’s just because I have one on my verge which is a menace! I do like them really…)

Plant a tree today for a better tomorrow!

Create the garden of your dreams with ideas and advice from a leading light in the gardening world, MELANIE WALKER… 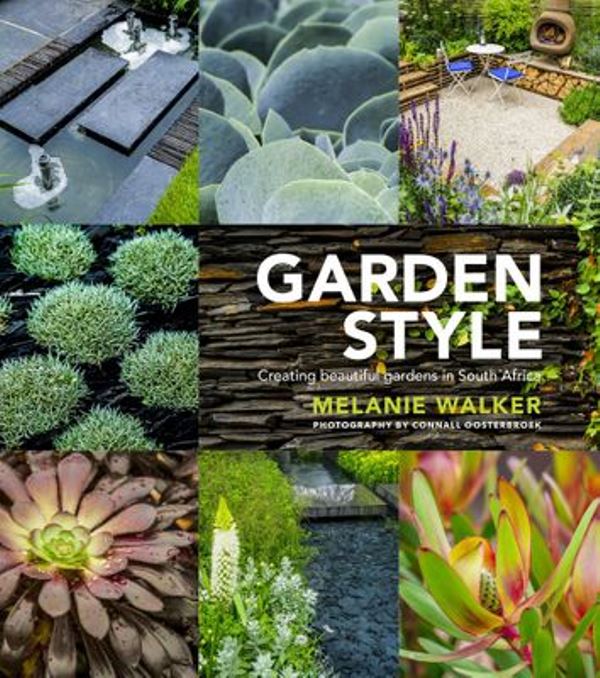 Whether you have a tiny urban courtyard or a roomy rural plot, Garden Style will inspire gardeners from every corner of South Africa to make the most of their garden and entertainment area.

Garden Style describes in detail how to achieve any of 19 distinct garden styles.

Each chapter includes sections on planning and planting, with a list of key plants suited to each style, plus lots of helpful tips and features on different aspects of gardening – and, of course, ample spectacular photos by top SA garden photographer, Connall Oosterbroek, to inspire you.

Available at most good booksellers including Wordsworth Books, Exclusive books and Reader’s Warehouses, and online through Zoot.co.za, bookdepository.com and uppercasebooks.co.za

If you live overseas, you can watch the Carte Blanche investigation into the beetle by subscribing to Showmax International here.

UPDATE 23 August 2022: Hardly any infected trees have been removed since this article was first published. In fact the zoo is a riddled too, and that’s a City Parks property. Melanie says “they’ve done some pruning and felling of dead trees but not that many”.