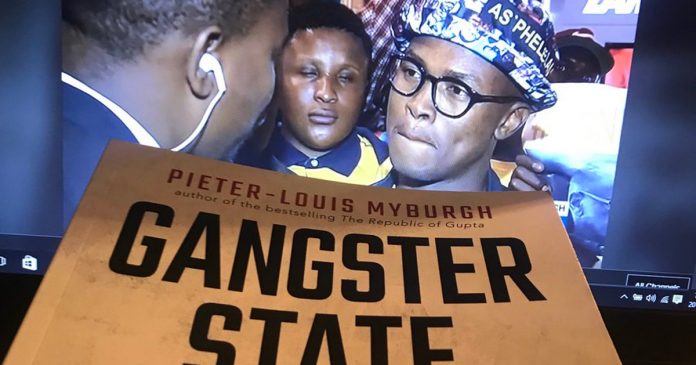 Barney Mthombothi, former editor of the Financial Mail in South Africa, tweeted on Wednesday: “We’re waking up to a different country this morning. Something awful happened last night. Prompt and decisive action, not words, is required. In a word, leadership #GangsterState.”

What happened is that a group of protesters, many wearing ANC gear, disrupted a book launch at Exclusive Books in Johannesburg, tearing up copies of “Gangster State: Unravelling Ace Magashule’s web of capture”, written by Pieter-Louis Myburgh.

In the book, Myburgh alleges that ANC Secretary General Ace Magashule bent, broke or bulldozed over clearly defined laws meant to ensure proper governance in the Free State during his time as Premier, creating a network of state-capture that made millions off taxpayers.

While the ANC “distanced itself” from the protest, many on social and in mainstream media called for action. Some – like columnist Tom Eaton – posted photos of book-burning events in Nazi times, and well known radio presenter Redi Tlhabi said: “I cannot believe a governing party believes it can simply “distance” itself from it. A careful reading of history, from Nazi Germany, to Stalin’s Soviet Union, Apartheid South Africa to Sani Abacha in Nigeria, this is not just and “unruly” demonstration. It is so much more!!”

Great action shot of the ANC Youth League in the Free State. (@CyrilRamaphosa, @MYANC: your thoughts on an official wing of the ruling party organizing a book-burning?) pic.twitter.com/PxtDbpFJpc

The ANC Youth League in the Free State has threatened to hold a book burning protest against ‘Gangster State’.

ANC Chief Whip Jackson Mthembu said Wednesday morning that he will be mobilising the ANC to “urgently bring those involved in the disruption of the #GangsterState #AceMagashule book launch before a disciplinary committee. Those thugs have brought the ANC name into disrepute. They have trashed our hard worn democracy.”

On Sunday evening, Carte Blanche interviewed investigative journalist Pieter-Louis Myburgh about his explosive new book (the show can be streamed in most overseas countries on Showmax International).

Carte Blanche recapped the case of state capture in the Free State government and said “these revelations have not gone down well with Magashule who has called it fake news, while the ANC has labelled the book a carefully planned Stratcom operation”.

Myburgh told Carte Blanche that he believes Ace was an “even more important ally than Jacob Zuma” to the Gupta family. He said “we should be terrified”.

Dennis Bloem, COPE Spokesperson and former ANC MP, also claimed in the show that “Ace’s plan is to topple Cyril Ramaphosa and then take over the ANC for his own personal interest”.

On Twitter last night, shortly after the protest broke out, News24’s Assistant Editor Pieter du Toit said: “Does the ANC realise what happened in the last hour and a bit will be seen by the whole world? Book burnings and attacks at book shops, tearing up pages?”

Hanekom said: “Disrupting book launches will not in any (way) stop this book from being read. There will be more book launches. The law must take its course. It will.”

Mbalula replied: “This is thuggery we definitely don’t subscribe to that, Books have being written about our leaders and books will still be written good and bad.”

Former South African Chief Justice Ismail Mahomed said in a post on Facebook: “When book launches become so high risk events that it will have to be protected by guards then we should stop crying for our beloved country. We should wipe out tears and read the writing on the wall that the ink with which our country’s constitution has been written is fast fading.

He said the disruption by Ace Magashule’s supporters “should send cold shivers down our spines because it is a threat to freedom of expression and speech – important values in the South African Constitution”.

Mahomed said: “Ace Magashule’s supporters fear that books are the powerful tools which will not only expose the corruption of political leaders in the ANC but that the books will be a testimony to future generations of South Africans of how a once-proud liberation movement has become a band of thieves who have stolen billions to rob future generations of South Africans of a better life.”

The councillors can be clearly seen in pictures which have been widely shared on social media.

Magashule has issued his own statement, confirming that he is “pursuing legal action against the false allegations made in the book”, and told his supporters “we must use peaceful and constitutional means to engage those who peddle lies and fake news”. Magashule said “those purporting to be ANC members and supporter disrupting book launches, burn books and intimidate authors and journalists in my name or to be revolutionary should desist”.

Tom Eaton has reminded those who’ve been sent a PDF copy of ‘Gangster State’ that it’s stolen property, and to please “buy a copy and contribute to the author and publisher who made these revelations possible”.

Pieter-Louis Myburgh said today that he hopes Fikile will reveal what he knows about Magashule.

In a tweet last night on Twitter, after the protests, Myburgh said: “A toast to South Africa. I love this country with every ounce of my being and I’ll continue to add my voice to those who believe in its future. Regardless of the best efforts of those who hate democracy. #GangsterState”

Before the book launch:

Tonight at 18:00 I chat with Mondli Makhanya @ExclusiveBooks Sandton City for the launch of #GangsterState @PenguinBooksSA Hope to see you there, Jhb! pic.twitter.com/am7u4EeefS

I will be mobilizing @MYANC ( NWC ) to urgently bring those involved in the disruption of the #GangsterState #AceMagashule book launch before a disciplinary committee. Those thugs have brought the ANC name into disrepute. They have trashed our hard worn democracy . pic.twitter.com/LIq3SnX4Yn

After the book launch

A toast to South Africa. I love this country with every ounce of my being and I’ll continue to add my voice to those who believe in its future. Regardless of the best efforts of those who hate democracy. #GangsterState pic.twitter.com/2bQneeoatn

If you’re overseas in many countries: you can watch #CarteBlanche and thousands of other popular local South African shows & movies by subscribing to Showmax International now. You can try it FREE for 14 days.