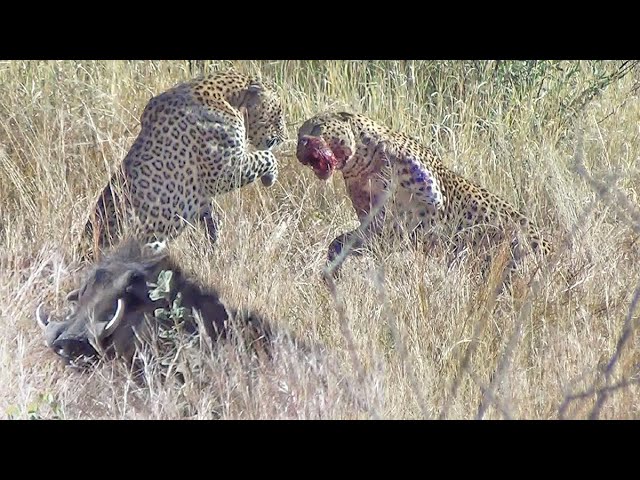 Seeing one leopard is highly unusual, especially in a small game park like Pilanesberg, but Gametrackers field guide Tarryn Rae and her client saw not only one but two, who battled it out over a warthog the one had caught – only for the warthog to escape.

“This was a first for me!” Rae told Latestsightings. “I have never seen a leopard catch something, let alone two leopards having a fight.

“It was really such an adrenaline rush and a feeling of gratitude to be in a position to witness this kind of interaction. It was sad to see the warthog fighting for its life and the squealing does get to you – but you realize that the leopard has to eat too.

“At the end on this day, it was the warthog’s lucky day, if he survived his injuries.”

WATCH leopards fight over warthog while it escapes

Rae said it had been a quiet day until that point. She mentioned to her client that leopards like warthog, and just then they sighted the leopard attacking the warthog, which was larger than itself, gripping on its back.

The squeals drew the attention of another, larger leopard, and before Rae knew it the two cats came out in the open, the first one’s face covered with blood from the warthog, and started fighting.

While they did, the warthog slowly made its way off to a nearby burrow.