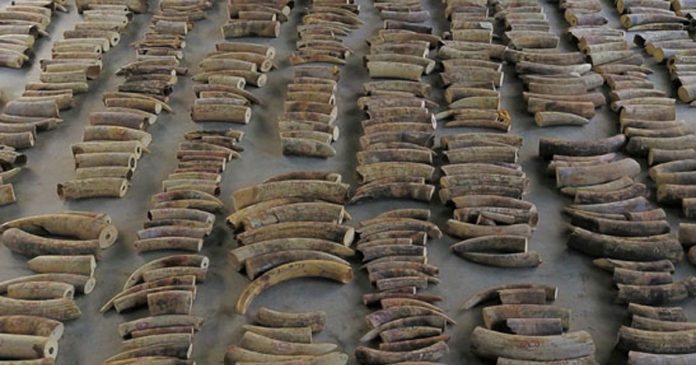 SINGAPORE – Singapore said this week it had seized 8.8 tonnes of elephant ivory, a record haul by authorities in the city-state, which conservation groups say is a transit point for the illegal wildlife trade.

The elephant ivory, estimated to be worth $12.9 million, came from nearly 300 African elephants, and was heading to Vietnam through Singapore from Democratic Republic of the Congo.

The haul also contained the third major seizure of pangolin scales in Singapore this year.

The pangolin, a scaly anteater, is one of the most trafficked mammals in the world. Its meat is considered a delicacy in Vietnam and China, and the scales are used in traditional Chinese medicine, though the benefits are disputed by medical scientists.

“The seized pangolin scales and elephant ivory will be destroyed to prevent them from re-entering the market,” the Singapore Customs, Immigration and Checkpoints Authority and the National Parks Board said, adding that the July 21 seizure came after a tip-off from China’s customs department.

The ivory haul falls just short of 9.1 tonnes seizure in Vietnam in March, which non-government organization Environmental Investigation Agency said was thought to be the largest ever globally.

There has been a flurry of seizures, including of rhino horns, in Singapore, Hong Kong, and Vietnam in recent months.

“Singapore has always been inadvertently implicated in the global ivory trade for two reasons: its global connectivity, as well as the presence of a small domestic market where pre-1990s ivory can be legally sold,” said Kim Stengert, chief communications officer for WWF Singapore.

“The consistency of these large-scale seizures is strong evidence of organized crime behind illegal wildlife trade coming through or into Singapore.”

Singapore authorities said the latest seizure also contained 11.9 tonnes of pangolin scales, worth about $35.7 million and equivalent to close to 2,000 pangolins.

Singapore has seized a total of 37.5 tonnes of pangolin scales since April, including one raid which was the biggest of its kind worldwide in five years.

The city-state is a signatory to the Convention on International Trade in Endangered Species of Wild Fauna and Flora (CITES) and says it is committed to the global effort to curb the illegal wildlife trade.