Johannesburg’s Caitlin Rooskrantz made history this past week when she became the first South African to win a gold medal at an international gymnastics competition. 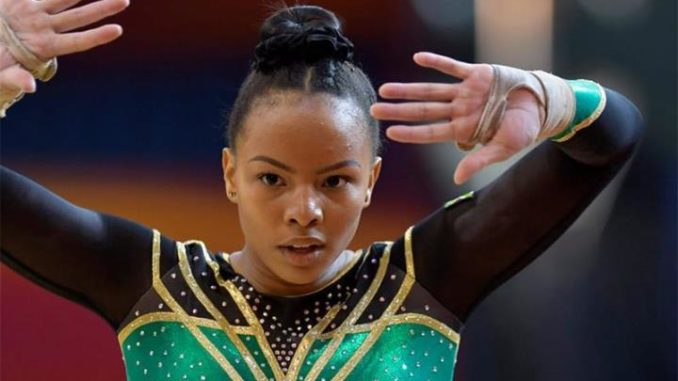 Competing at the Szombathely Challenge Cup in Hungary, the 17-year-old scooped up a gold medal in the Uneven Bars,  ahead of Phoebe Jakubczyk from Great Britain and Roxana Popa from Spain.

The Szombathely Challenge Cup forms part of a series of competitions that is organized by the International Gymnastics Federation.

These competitions also serve as an opportunity for gymnasts to earn points so that they can qualify for the 2020 Olympics.

This month, Caitlin will be flying to Germany to compete at one of these Olympic qualifying competitions, the 44th Turnier der Meister FIG Individual Apparatus World Cup

She was South Africa’s 2018 All-Round champion, competing in all four apparatus (Uneven Bars, Beam, Floor and Vault) to claim the highest score.

This year however, she was recovering from a foot injury, which meant that she could not compete in all of the apparatus.

In 2017, another injury resulted in her having to undergo major knee surgery, but despite these setbacks, she still went on to become a South African, African and ‘history-making’ international gold medallist.

When asked what the secret to her success is, she answers quite simply, “perseverance and hard work”.

She practises from Monday to Saturday, four and a half hours a day, and that’s in addition to having to attend school, do her homework and make sure that she maintains her good grades.

Caitlin says that her mom always keeps her grounded and strong, motivating her and being there “since day one”.

When asked how she became a gymnast, she replies that when she was 6, she could not sit still and a family recommended gymnastics as a way of releasing all that pent up energy.

Given Caitlin’s list of achievements, it seems to have worked.

Caitlin’s mom, Veda, says that when she speaks to Caitlin about her achievements, she lets her know that it is not just about medals and trophies.

It is also about building character and so far, the character displayed by Caitlin is something that Veda is very proud of.

A single mother of two whose husband died when Caitlin was eight, Veda admits that it can become overwhelming, especially when your daughter is an elite athlete.

This week alone, Veda has had to arrange multiple radio, TV, magazine and newspaper interviews, drive Caitlin to her interviews and practises, and make sure that everything is arranged for her trip to Germany.

Despite having sometimes felt like she can’t cope, Veda says that it is all worth it when she looks at how far her kids have progressed

Both Veda and Caitlin is full of praise for Ilse, who has become an important part of their lives, being there for the family, especially through the tough times.

Veda also added that growing up in a Coloured community, her generation did not have many opportunities and she always tries to motivate kids to grab the opportunities that are available to them.

She also feels that more should be invested into building the character and self-esteem of today’s youth, so that “they can feel like they belong on those international podiums”.

Caitlin says that getting to that podium is challenging and can become overwhelming; but with discipline, determination, self-esteem and proper time management, if you set your mind to it, it can be done.

Note: A sincere thanks to both Caitlin and Veda for taking the time to talk to us.

This article first appeared on Coloured SA and is republished here with their kind permission. Please view the original here.