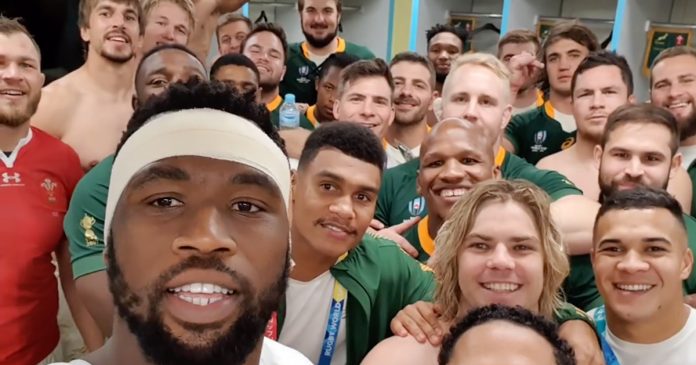 Captain Siya Kolisi thanked South Africa for its support of the Springbok team and reflected on the importance of the nail-biting, 19-16, Rugby World Cup semi-final victory over Wales at the Yokohama International Stadium on Sunday.

“When we last won the World Cup, I was watching it in the tavern, because we didn’t have a TV at home,” said Kolisi, who was 16 when John Smit’s Springboks won the title in 2007.

“I remember what it did for us as a nation – I have never seen people come together over sport like that. Thank you for your support South Africa – it really means a lot to us.”

The victory earned the Springboks a repeat of that 2007 final with a showdown against England back at Yokohama on Saturday.

The match will be attended by State President, Mr Cyril Ramaphosa, who made a good luck video call to Kolisi on Saturday.

“It was really special for him to take time out to wish us luck and not only from him but from all the people in South Africa,” said Kolisi.

“We get all the messages from South Africa and it is really special to see how the people at home have bought into what we are doing here and how they are supporting us.”

“The coach gave me my first contract when I was 18 and he has coached a lot of the guys at different times,” he said.

“He knows us, and we bought into his plan.

“As soon as he came, he made it clear that the most important thing was the Springbok, whereas in the past we tried to build ourselves through social media or whatever.

“He just brought us back to earth and told us that we have to play well first and then everything else would come. It’s awesome to see it come together as it has and to be in the final will mean a lot for us.”