CAPE TOWN – On Wednesday 30 Oct, Reuters reports that “South African police used brute force to disperse refugees who were peacefully protesting in a sit-in outside the UN High Commission for Refugees (UNHCR)… Videos of children being ripped away from the arms of their parents circulated on social media. Fearing for their safety in South Africa and xenophobia, foreigners and refugees have been conducting a peaceful sit-in protest for the past few weeks outside the UNHCR office.” Below is an article and photos from SA’s GroundUp:

Refugees camped outside the United Nations High Commissioner for Refugees (UNHCR) in Cape Town were evicted by police on Wednesday with stun grenades, rubber bullets and water cannons. Some mothers were separated from their children.

At 11am on Wednesday the South African Police Service (SAPS) blocked off Burg Street and began removing the refugees who have lived outside the Waldorf Arcade for the past three weeks. They have been demanding that the UNHCR help them leave South Africa because of xenophobic violence.

Rwandan refugee Francine Iturushi Imbabazi said she had been separated from her two young children in the chaos.

“The police were fighting and trying to catch me.” She says when she told the police officers she was looking for her children, she was told to shut up and she was manhandled. She is six-months pregnant. She told GroundUp she did not know where her children were. They are three years and one year and seven months old.

After broadcasting a warning, police sprayed refugees with water cannons. People ran for cover. Some were dragged away by police and put into trucks.

Congolese refugee Vanessa Tshipadi, who is 20, said her mother’s clothes had been torn and the younger children had been taken away.

One woman showed GroundUp a video of a man with a bloodied face in the back of a police truck. Some people were taken away on stretchers.

Congolese refugee Evonne Meta, hugging her child, said, “The police come with their water and they hit people. They tear my clothes. We don’t have any place to go with our kids. I have five kids.”

Women and children congregated in the Methodist church across the street. Two men embraced, sobbing.

In a statement, the office of the Provincial Commissioner of Police said about 100 people had been arrested “after they failed to heed the call to disperse”.

“The police are in the area to support the sheriff in executing a court order to evict about 300 refugees and asylum seekers who have been occupying the building in a sit-in protest for quite some time,” said the statement. “The court order was granted on 18 October at the Cape Town Magistrates Court after the landlord made an application to evict the group.”

The statement said law enforcement officers and officials from the departments of Social Development and Home Affairs were also present.

Commissioner Chris Nissen of the South African Human Rights Commission said his office had held meetings with the refugees. Asked about the violence today, he said a SAPS colonel had told him “minimum force was used”.

“Obviously, we need to do our assessment and investigation into what happened.”

Regarding the demands of the protestors, Nissen said, “We must also understand there are protocols involved in different countries. You can’t just take people from here and take them elsewhere.” 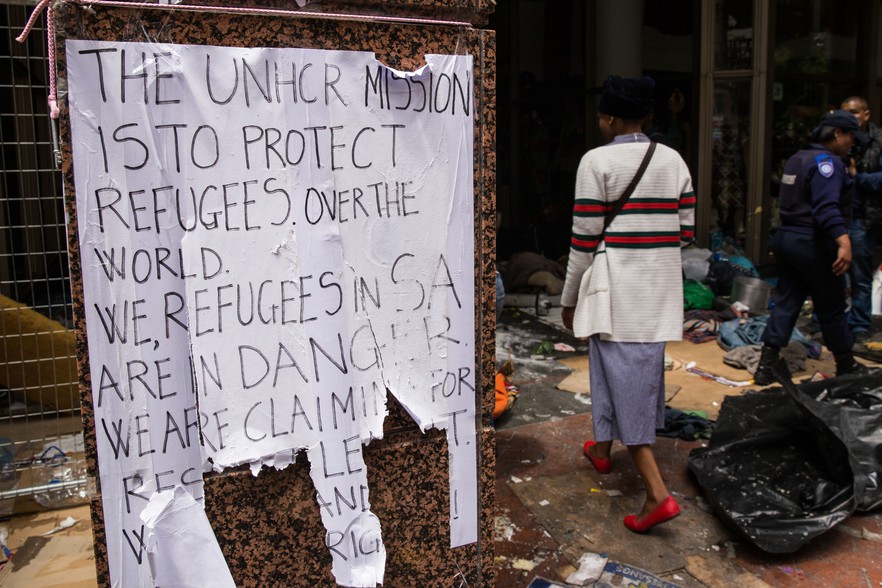 WITNESS ACCOUNT: Following video footage and local reports, a witness to the incident said she feels the media has twisted the words and that the police were talking nicely and begging the people to leave before the media arrived.