The KZN MEC for Cooperative Governance, Sipho Hlomuka, confirmed the tornado to Jacaranda FM. His spokesperson said: “There are fears of possible missing people and deaths.”

Disaster management teams have been dispatched to the affected areas – including Thokozani and Mpolweni.

It is feared that many people have sustained injuries, and homes have been destroyed. Trees were blown over and roads have been closed, the KZN spokesperson told Jacaranda FM.

One witness said people lost their homes in Empolweni, Pietermaritzburg. Others said it also appears to have caused damage to a sub-station (and a video did seem to substantiate this claim).

The SA Weather Service (SAWS) did not warn of a tornado, although they had issued ‘severe thunderstorm’ warnings with “possible hail, strong winds and heavy rain that might lead to localized flooding”.

At 20h45 SAWS confirmed they had seen the video of the “observed tornado over the KZN Midlands”; and that any severe thunderstorm has the potential to form a tornado.

SAWS did however point out that it is NOT true that the tornado was heading to Durban. (It was in the New Hanover / Mpolweni area.)

SAWS said: “Please be aware of a hoax social media message making rounds regarding a tornado moving to Durban and forming in Harding. This is inaccurate. However, thunderstorms are still expected in places in KZN and alerts will be issued if they become severe.”

Earlier this evening, Weather Watch SA explained that “Tornadic supercell developed in the Pietermaritzburg area dropping what looks to be a large tornado as well as various reports of severe hail. Instability and wind shear were both supportive of supercells in the area.” 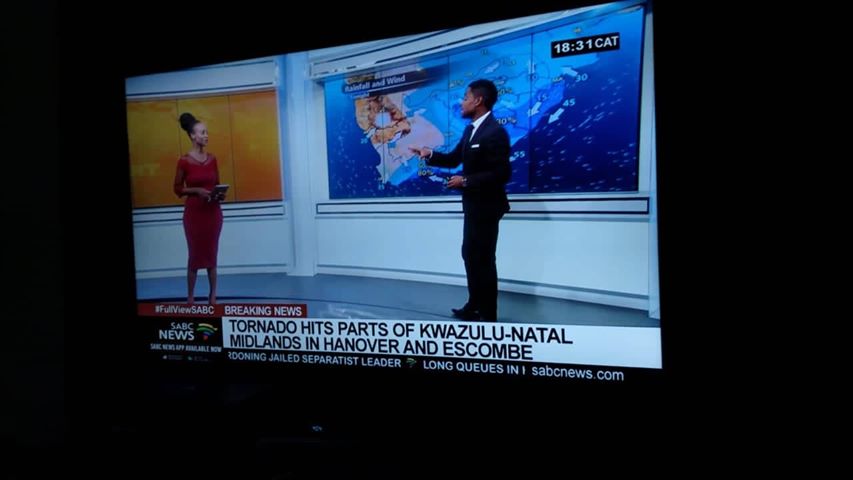 Three people have died during the severe storms and flooding in KZN – a couple in their 50s, who were asleep in bed at around 10h00 on Monday evening, died when their shack collapsed on them in Inanda, north of Durban. And a 24-year-old woman has reportedly been fatally struck by lighting in Ukhahlamba in the KZN Midlands. (SAWS emphasised in a tweet that “when thunder roars, go indoors”.)

WATCH Several Videos of the Tornado in KZN

Tornadic supercell developed in the Pietermaritzburg area dropping what looks to be a large tornado as well as various reports of severe hail. Instability and wind shear were both supportive of supercells in the area. pic.twitter.com/nSdnfZ7jVp

Here is a GFS skew t sounding at 12z south of PMB – where cells developed today. We can see extreme CAPE (>3000j/kg) and some very clear wind shear (becoming directional).

The SAWS has seen the video of the observed tornado over the KZN Midlands. Numerous severe thunderstorm warnings have been issued for KZN & EC. Any severe thunderstorm has the potential to form a tornado if conditions are conducive. Please see description below. pic.twitter.com/V4UOi67tqo