The Springbok Sevens team totally outplayed Samoa to win their Cup semi-final of the Dubai Sevens by 38-7 on Saturday at The Sevens Stadium, where they will meet New Zealand in the final at 17h02 (SA time). 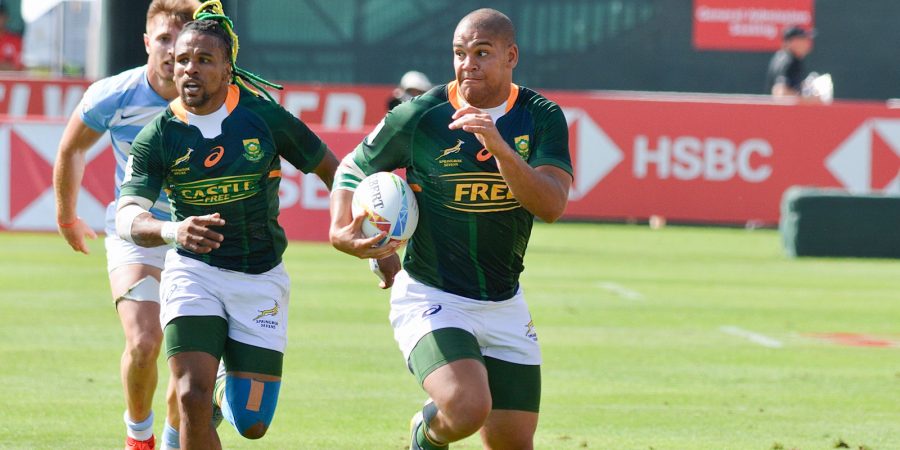 The match against Samoa was a tight affair in the opening minutes. The Pacific Islanders kept the ball from the kick-off and were rewarded for their patience on attack when Paul Scanlan scored under the sticks. Tomasi Alosio converted to give the men in blue an early lead.

Six tries by the rampant South Africans followed though – three in the first half to hand them a 19-7 lead at the break, and three in the second, as the Blitzboks eased away from the Samoans.

The first of the Blitzboks’ tries came from Zain Davids, who left numerous Samoans in his wake after a bulldozing run to the line. Justin Geduld slotted the conversion to level the scores.

The Blitzboks were back at it soon after as Rosko Specman took a quick-tap penalty and after some good passing, Chris Dry found the space to score his 95th try of his career.

Dry instigated the next try. He won the aerial battle from the kick-off, Ryan Oosthuizen ran strongly and when the ball was moved wide, Siviwe Soyizwapi ran in unopposed. The conversion was good and the Blitzboks took a comfortable lead at the break.

The second half saw the customary introduction of the bench. Seabelo Senatla first off-loaded for Ruhan Nel to score, before the winger dotted down for his 226th Blitzbok five-pointer, extending his national try-scoring record.

Selvyn Davids also made merry when he grabbed a spilled Samoan ball, kicked ahead, outpaced the cover defence and scored, to make the score line a commanding 38-7.

Earlier, New Zealand beat England 19-12 to make it into the final.

Earlier, the Springbok Sevens side scored two first half tries and then defended strongly to secure a 12-5 win over Argentina in the Cup quarter-finals of the Emirates Airline Dubai Sevens.

They faced Samoa who outplayed Australia in their quarter-final.

The Blitzboks started well against Argentina, who yesterday knocked over Fiji. A sustained attack, with numerous phases and good support play saw Justin Geduld over in the corner after two minutes.

The match, with Argentina bringing a very physical approach, went to and fro as both sides probed for weaknesses. A try by Rosko Specman, in the sixth minute, proved to be the game-changer.

Argentina forced an attacking line-out near the Blitzbok line, but they fluffed the throw-in and were penalised for holding onto the ball in a tackle. Ryan Oosthuizen seized the moment – he tapped and set off, finding Geduld who found a flying Specman on the outside. The talisman ran 70 meters to score under the posts for a well-deserved half-time lead.

The second half was equally tight with defences holding sway. It was Argentina though who broke the deadlock in the 10th minute with a well-worked try.

The Blitzboks defended their seven-point lead till the very end though, with a crucial turn-over won by Dylan Sage in the final play allowing them to kick for touch and a place in the final four of the tournament.