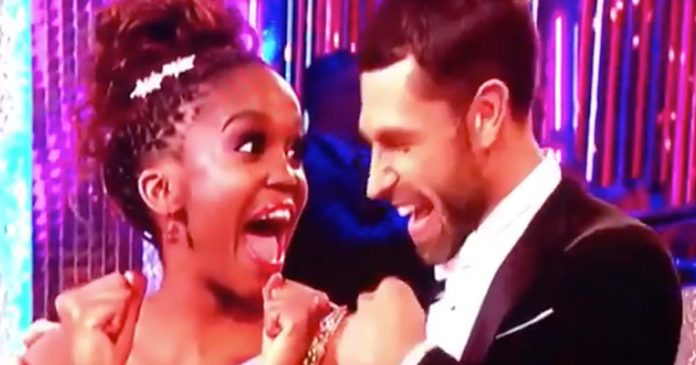 In an emotional final, with tears flooding the studio, South African expat and dancer Oti Mabuse, together with her celebrity partner, actor Kelvin Fletcher, has been crowned winner of the UK’s popular Strictly Come Dancing!

UK reporters expressed their “delight” for Oti. “A glitterball win has been a long time coming (for her),” said a journalist from The Guardian.

This is the first time Oti has won the Glitterball Trophy at the competition. It was a family affair on Saturday night, with her sister Motsi having become one of the judges on the BBC One show this year.

Oti and Kelvin’s win was no big surprise – they were favourites after shining throughout the competition, with former Emmerdale actor Kelvin putting in at least 12 hours of gruelling training per day.

Oti said in an interview before the winners were announced that her advice to Kelvin, who was a last minute replacement, had been to focus on the 1% of himself that felt confident and turn that into 100%.

In what’s being touted as the best final ever, Kelvin and Oti beat Emma Barton and Anton Du Beke; and Karim Zeroual and Amy Dowden.

Each couple performed three dances during the Final, with the judges scoring each dance… but the winner being selected by audience votes alone!

Oti and Kelvin achieved a perfect score for their showdance to Shout (by The Isley Brothers). Watch below. Their other dance routines were the rumba to Ain’t No Sunshine by Bill Withers, and the samba to La Vida Es Un Carnaval by Celia Cruz.

Another South African dancer – Johannes Radebe (32) – was also involved in this season of Strictly Come Dancing UK, after last year being part of the chorus. He and his partner (actress Catherine Tyldesley) were unfortunately eliminated in November.

Pretoria-born Oti made her debut on the BBC’s popular series in 2015, with the British broadcaster introducing her to UK audiences as “a very hot 25-year-old from South Africa”.

Making her dreams come true tonight on the British stage, it’s hard to believe that Oti almost became an engineer…and actually studied Civil Engineering at university! But ballroom was always her true passion.

After achieving those accolades Oti moved to Germany to pursue new challenges. She has since collected a few more titles including World European Latin Semi-Finalist, World Cup Championship Semi-Finalist and winner in the German Championship PD Freestyle Latin.