Around 480 million animals are estimated to have been killed in New South Wales (NSW) alone since the start of  bushfires which have turned parts of Australia into apocalyptic scenes with landmark buildings, schools and homes burnt to the ground, cars gutted and thousands huddled on beaches beneath blood red skies. The fires began in September 2019 and this statistic doesn’t even include the other states.

“The true loss of animal life is likely to be much higher than 480 million. NSW’s wildlife is seriously threatened and under increasing pressure from a range of threats, including land clearing, exotic pests and climate change,” said the University of Sydney in a statement on Friday.

The University’s Professor Chris Dickman said that his calculations were based on a 2007 report for the World Wild Fund for Nature (WWF) on the impacts of land clearing on Australian wildlife in NSW.

Australia has a rich diversity of mammals, with over 300 native species. The continent is uniquely dominated by marsupials and is the only great land mass to contain three major groups of living mammals: marsupials, monotremes (egg-laying platypus and echidna) and placentals.

About 244 species, or 81% of this distinctive fauna, are found only in Australia, according to the University of Sydney.

“Some 34 species and subspecies of native mammals have become extinct in Australia over the last 200 years, the highest rate of loss for any region in the world,” says Prof Dickman who has 30 year’s experience working on the ecology, conservation and management of Australian mammals..

The authors deliberately employed highly conservative estimates in making their calculations. The true mortality is likely to be substantially higher than those estimated, said the statement.

“Many of the almost half a billion animals are likely to have been killed directly by the fires, with others succumbing later due to the depletion of food and shelter resources and predation from introduced feral cats and red foxes,” the ecologists said in the statement.

Heartbreaking photos and videos have been shared on social media showing the plight of millions of Australian animals – kangaroos fleeing, koalas begging for water. Many of those that barely survive and are burnt will need to be euthanised to end their suffering, say wildlife rescue groups.

The koala population has been dwindling in recent years and it’s estimated by Government authorities that 30% of the Australia’s koala population may have died… with 8,000 dying since the fires began, too slow moving to be able to escape.

According to ABC, government figures show that Australia’s marsupials are responsible for around $1.1 billion to $2.5 billion per year in tourism.

Today fires continue to burn around the country. NSW has been warned the fires could be worse than those on New Year’s Eve. In Victoria three burning fires have merged overnight to become a 6,000-hectare fire. Evacuation orders are in place at six of the fires in the state. In South Australia, two people died overnight in fires on Kangaroo Island. In Canberra a man was arrested for trying to light grass fires last night.

Community spirit is still high. Bushfire victims in Gippsland have been able to ‘shop’ for free at the community hall in Lucknow where donations of clothes and food have been pouring in. The ABC reports that Human Appeal Australia, a Muslim charity in the area, and Australia Islamic Centre have teamed up to cook food and deliver supplies to Gippsland communities affected by the fires.

7News in Australia published this heartbreaking photo of a baby kangaroo that got caught in wire mesh and couldn’t flee, saying: “Publishing distressing photos like this is a difficult decision but, tragically, this is the brutal reality of Australia’s bushfire crisis.” 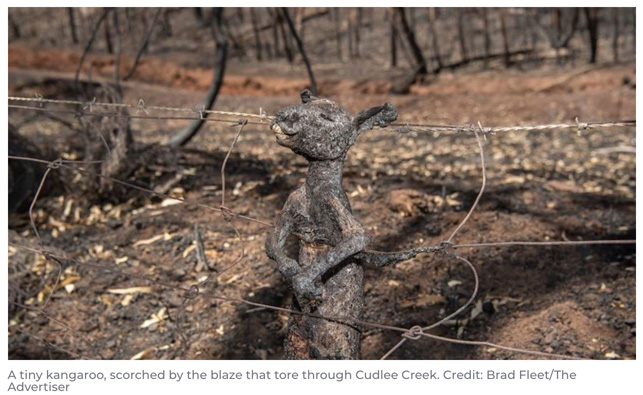 Heartbreaking footage of kangaroos fleeing has been captured in Monaro, NSW, as bushfires close in.

Read about the hunter hero in Mallacoota, Australia, who has saved 9 koala!