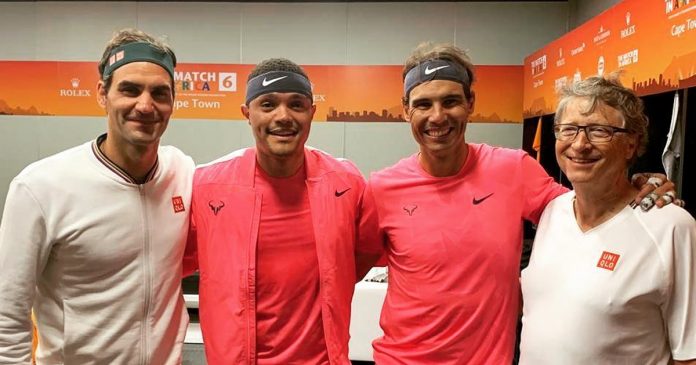 It was an African Dream in Cape Town tonight, 7 Feb 2020… as a world record-breaking crowd of 51,934 spectators were moved to tears of joy and pride as South Africa hosted Roger Federer’s Match in Africa.

Late Friday night, Federer posted a message on Facebook saying: “It was always a dream of mine to play in South Africa for my foundation.”

Federer’s mother Lynette is an SA expat who grew up in Kempton Park, and Federer grew up having holidays to South Africa. Tonight his Afrikaans-speaking mother (67) stepped onto the court to toss the coin (and gave both her son and Nadal a hug).

Addressing the stadium, she said: “We love the people, we love the country, we just love you all.”

An elated Federer said: “I am so proud to say we raised over $3 million this evening🙌🇿🇦✅ #worldrecord #southafrica.” (It’s far beyond the $1 million he was hoping for.)

The tennis legend thanked Spain’s Rafael Nadal (the world number one player), South African comedian Trevor Noah and Microsoft founder Bill Gates for their “support of this incredible event”. Noah and Nadal lost to Federer and Gates in a celebrity knock before the main match.

It definitely looks like @Trevornoah is excited to be taking part in the #MatchInAfrica with @RafaelNadal in his home country, as they take on @rogerfederer and @BillGates 🤣🇿🇦

Might this be the greatest rally of all time? 😅#MatchInAfrica pic.twitter.com/0LEPBLlWm2

Victory for @rogerfederer and @BillGates! 👏

Federer beat Nadal 6-4, 3-6, 6-3 in what Nadal said was a “lifetime experience”. Nadal said: “It was a big pleasure for me to be part of it. Thanks everybody for supporting and for making this day very, very special.”

It was an unforgettable evening for South Africa from start to finish. The Ndlovu Youth Choir began the evening with ‘African Dream’ while Zip Zap Circus children performed.

Later Springbok captain Siya Kolisi received a huge cheer from the audience when he stepped onto the court to toss the coin.

Kolisi presented Federer with his own Springboks jersey. (Their bromance began during the Rugby World Cup when Federer sent Kolisi and the Springboks a message of support.)

And finally, Trevor Noah reminded the euphoric crowd: “It’s events like these that remind South Africans of what we can do in the world.”

Selfies before the match:

Roger’s family at the stadium:

.@rogerfederer's wife Mirka, mom Lynette and father Robert take in the sights and sounds of Cape Town Stadium for the @matchinafrica 🎾 Had a word with Lynette, and that South African accent was 🔥 🇿🇦 @IOLsport @IOL @WeekendArgus #MatchInAfrica #Federer #Nadal pic.twitter.com/UIxDnoJJee

"Rafa told me today that he cried when I won my French Open in '09, he was so happy for me."

So much respect between two of the very best 👏@rogerfederer @RafaelNadal #MatchInAfrica pic.twitter.com/dulmCoVbji