The Economic Freedom Fighters (EFF) created chaos at the State of the Nation Address tonight, infringing on the rights of all those who wanted to hear President Cyril Ramaphosa deliver his address… and delayed the President’s speech by almost an hour before the Speaker of the House Thandi Modise announced that the proceedings in the House are Suspended. 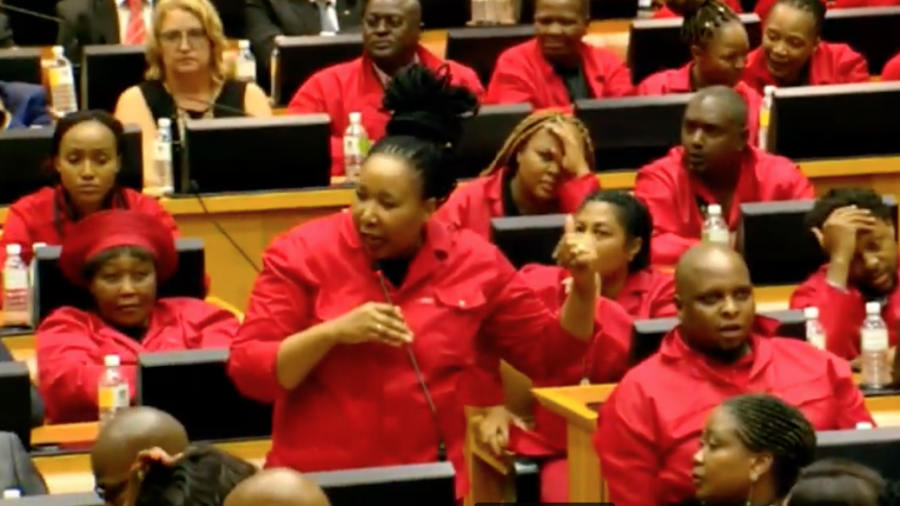 EFF Leader Julius Malema and his colleagues argued with the Speaker Thandi Modise that former President FW de Klerk (the last president during apartheid South Africa) should be removed from Parliament. Malema accused De Klerk of having blood on his hands.

The Speaker said that according to the rules President de Klerk and all former leaders of South Africa are invited to the SONA, and De Klerk was invited. (Someone also pointed out that De Klerk was also voted Deputy President of the new democratic SA in 1994 and therefore did belong.)

The IFP’s Prince Buthelezi suggested a vote get taken as to whether De Klerk be allowed to remain or not. The EFF seconded it, but the Speaker said the rules (13.2) do not allow for it at a joint sitting. 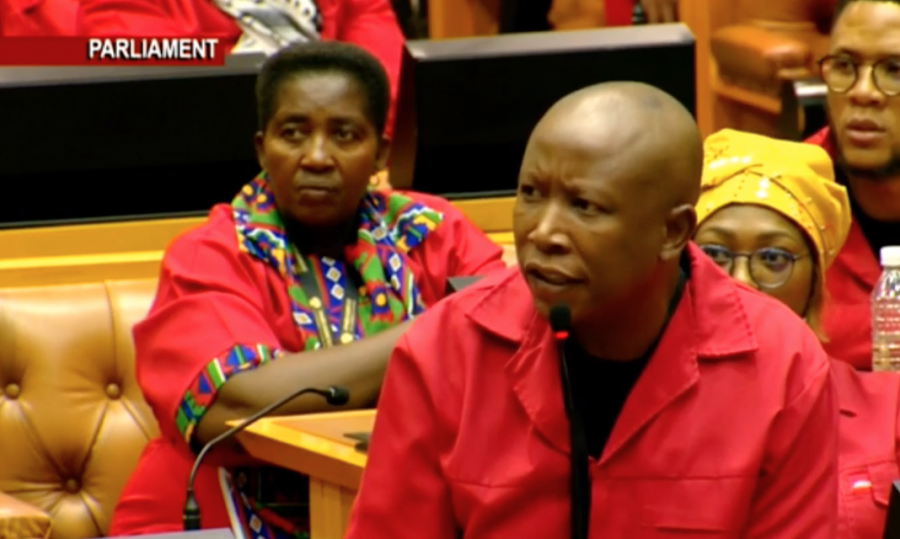 The President managed to greet Parliament before he was told to sit down (!) by the EFF who wanted to stand on a Point of Order (rules say the President must sit before they could talk).

This time the EFF interrupted with a verbal onslaught on Enterprise Minister Pravin Gordhan, blaming him for load-shedding (and misleading Ramaphosa on Eskom) and SAA’s business rescue that means they can’t even fly to Durban on SAA. The EFF demanded that Ramaphosa fire Gordhan immediately… promising “you’ll have a peaceful house” (if he adjourned the House to fire Gordhan). 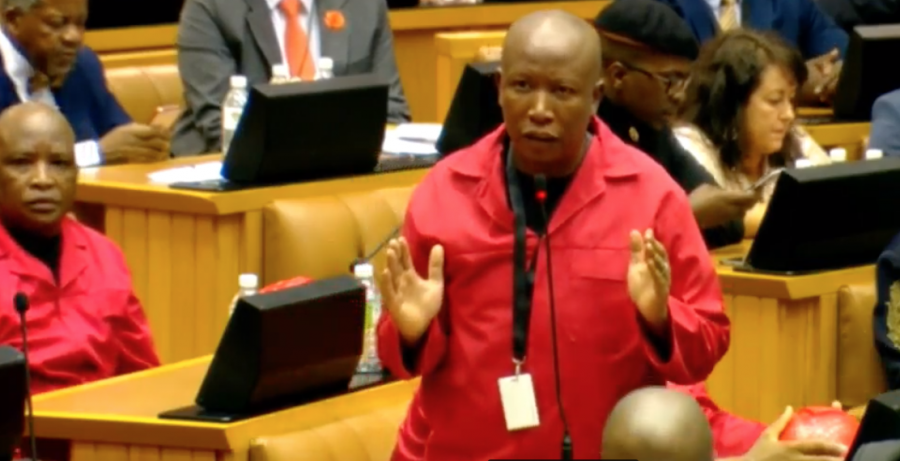 The Speaker said: “I’m sure South Africa is not very proud of us tonight…”

The President stood for a brief second before being interrupted again. Malema pointed out it was against the rules for the Speaker to say she would no longer recognise those who raised their hands on a Point of Order.

Prince Buthelezi said that the minority (the EFF) should not be able to wield their will on the majority when most members wanted to listen to what the President has to say; and that it is their constitutional right.

Finally the Speaker suspended the House. See updates below… 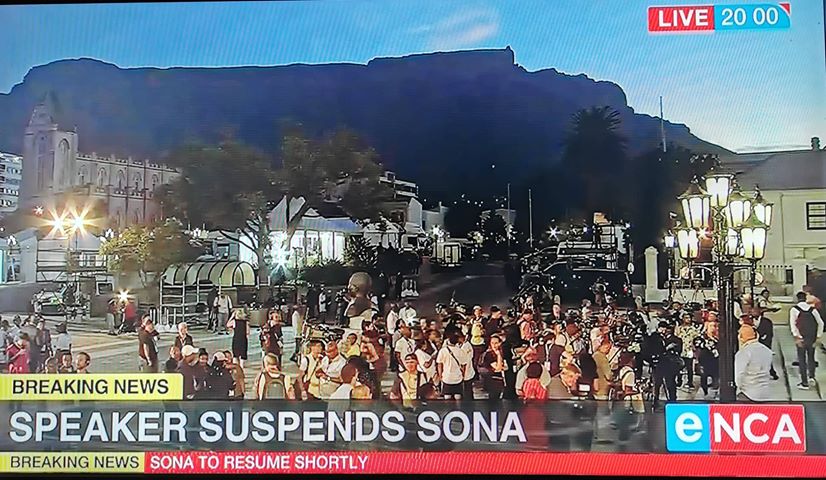 Update 20h08: Zizi Kodwa, Deputy Minister of Security, says the President will deliver the SONA tonight. He also reiterated (when asked) that President FW de Klerk was elected a deputy president in 1994.

Update 19h16: After chanting “Pravin Must Go” and pointing at Minister Pravin, the EFF then left the House.

“Honourable Members, please close the door,” said the Speaker as they left! 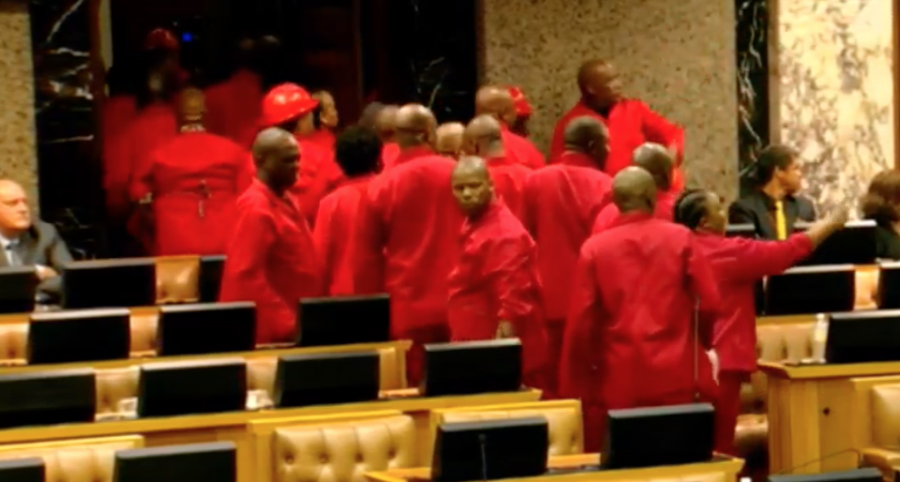 Acting DA Leader John Steenhuisen asked that those who disrupted be charged, especially those who threw water bottles. Meanwhile the EFF were seen singing on the steps of Parliament outside.

Malema told reporters he will continue to speak up rather than dress up for the red carpet and act like everything’s good in South Africa when it’s not – when our families, brothers, sisters, friends are losing their jobs at SAA and other state owned entities. He again called for Gordhan to be fired and said if he’s not Ramaphosa will receive the same treatment Zuma did. He said the fight against white monopoly capital starts now. Malema said Gordhan is being treated like he’s “untouchable” because he’s close to Ramaphosa and he’s not African.

Patricia Lille told the Speaker she allowed the EFF to undermine her by letting them over-ride her rulings, and said it was a bad precedent to set.

Watch all the fun and President Cyril Ramaphosa (hopefully) deliver his State of the Nation Address (SONA) live here: