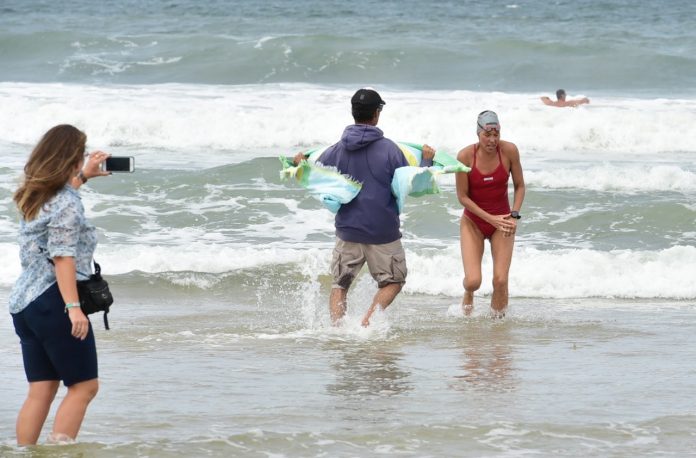 On Friday 28 February 2020, Capetonian marathon swimmer, musician and mother-of-three Carina Bruwer became the first woman to swim across Nelson Mandela Bay in Port Elizabeth, in support of Muzukidz, an organisation that offers underprivileged children the opportunity to learn the violin. 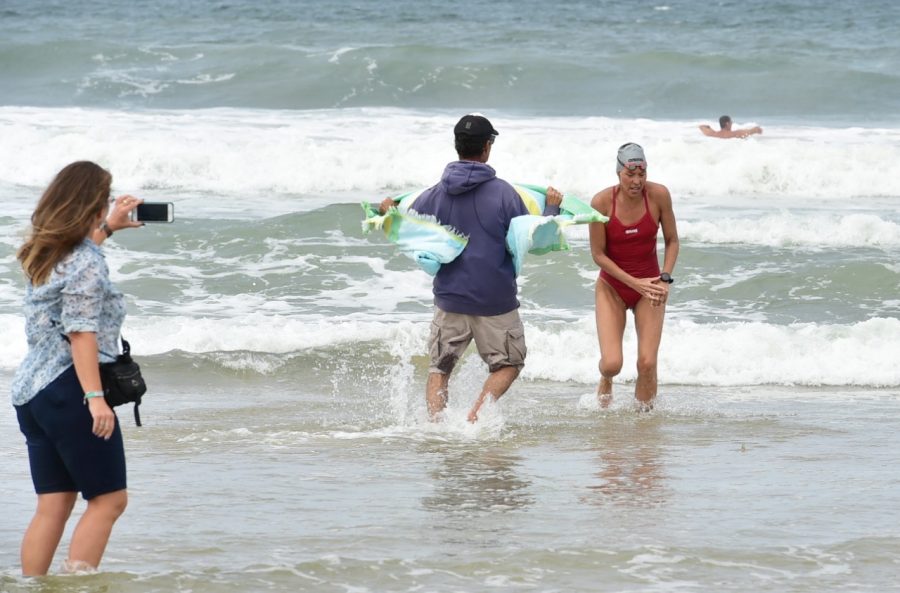 Bruwer completed the gruelling crossing from Pollock Beach in Summerstrand, Port Elizabeth, to Bluewater Bay on the Coega side of the bay in a time of 05:08.

The distance swum was approximately 19km.

A group of children from the local Muzukidz project greeted saw her off with some music and support at Pollock Beach, where she embarked on her challenge at 07:50. 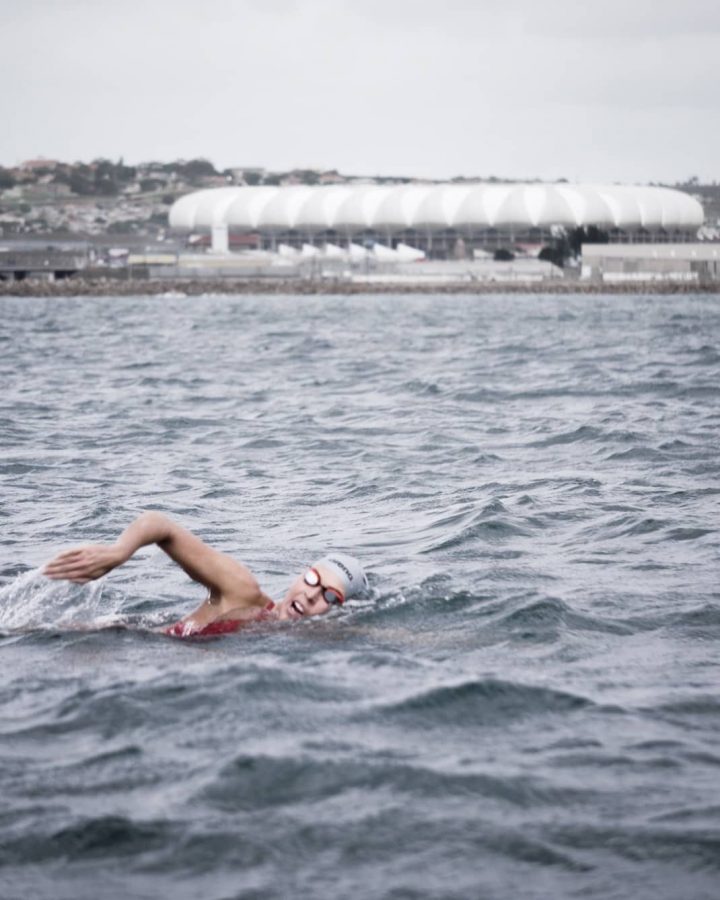 “The kids just gave me so much joy and I entered the water with a sense of purpose. It was not an easy swim – the temperature was a few degrees colder than I would have liked for a long swim like this, with the cool outside temperature and overcast conditions contributing to a consistent drop in body temperature”, said Bruwer.

“Thanks to the cause and the enthusiasm of the children, as well as the amazing support team from Adventure Swims ZA, I managed to stay positive, allowing me to keep up my stroke rate for most of the distance”.

The water was choppy for much of the swim, and there were periods of light rain.

Dolphins and whales were swimming within 200m of the swimmer, and the crew also spotted a hammerhead shark during the first half of the swim, but it posed no threat to Bruwer (thank goodness!).

Over the past 20 years, three male swimmers have crossed the bay. PE swimmer / adventurer Kyle Main did the 20km crossing from Hobie beach to Coega on two occasions (first of which was in 2000), while Chris Malan completed a 15km crossing across the bay in 2003 at the age of 15, a route which internationally renowned Lewis Pugh also followed in 2006.

Local sports company Adventure Swims ZA took care of all the planning and permissions pertaining to the crossing, and provided support in the form of two boats (one from Raggy Charters and one private vessel) and a team consisting of pilots, a power / rescue swimmer and a medic.

The Port Authority, NSRI, KB Surf lifesaving and Guardmed were on standby throughout the swim, to assist in case of an emergency. The boats were equipped with multiple shark shields, and there were dedicated shark spotter on each boat.

Carina, an International Marathon Swimming’s Hall of Fame nominee who was also ranked as one of the World Open Water Swimming Association’s top 50 most “daring, courageous and audacious” open water swimmers in the world in 2015 and 2018, said “No swim is simple. This was is extra intricate due to the complexity of passing shipping lanes, harbours, and the high shark population.

“I could not have dreamed of doing it without all the ground work and assistance provided by Adventure Swims ZA, and the support of the people of PE has been simply heartwarming. It truly is the Friendly City and I would love to swim here again soon!”

“I’m elated about the success of the fundraising – we have exceeded the R25,000 mark and going strong; in fact I have increased the target and I know we can make this huge. Each additional R1,000 buys another violin, which literally changes at least one life”, says Carina.

Carina is also a well-known musician who performs with the internationally renowned instrumental group Sterling EQ.

She founded Swim For Hope in 2014 as a fundraising platform through which open water swimmers can dedicate a solo or group swim to a worthy South African cause. Since its inception, Swim For Hope has raised over R600,000 for different charities, in addition to media coverage to the value of more than R1 million.

The project’s current beneficiary is MUZUKIDZ which, after 5 years working exclusively in
Cape Town, has now also opened a branch in Port Elizabeth. Operating from Settlers Park Primary in Walmer, Muzukidz has one teacher in PE, who has taken 50 young children from townships in and around PE  under her wing.

Children are taught at no cost to the families and Muzukidz relies solely on external funding to cover costs for teachers, instruments and teaching material. The organisation hopes to be able to appoint a second teacher and reach 150 children by mid-2020.

“Muzukidz is the perfect beneficiary, as I truly believe in empowering South Africans and growing South Africa through education, and being more of a performer than a teacher myself, I was delighted to discover this amazing organisation as it represented everything I was hoping to support as a musician.

“I believe that giving a child the opportunity to learn a musical instrument goes way beyond the ability to make music or the possibility of being a musician one day. Music stimulates the brain in a very special way; in fact studies have shown that children who do 14 months of musical training displayed more powerful structural and functional brain changes. Imagine what this can do for a young child who comes from a poor background and who has limited opportunities and a limited support structure.

“I am convinced that organisations like Muzukidz are helping to mould our future leaders, inventors and change makers.”

Members of the public, as well as corporates are encouraged to sponsor and donate.