South Africa will officially go into lockdown at midnight on Thursday night, 26 March 2020, for 21 days, President Cyril Ramaphosa announced in a live streaming to the nation on Monday evening. 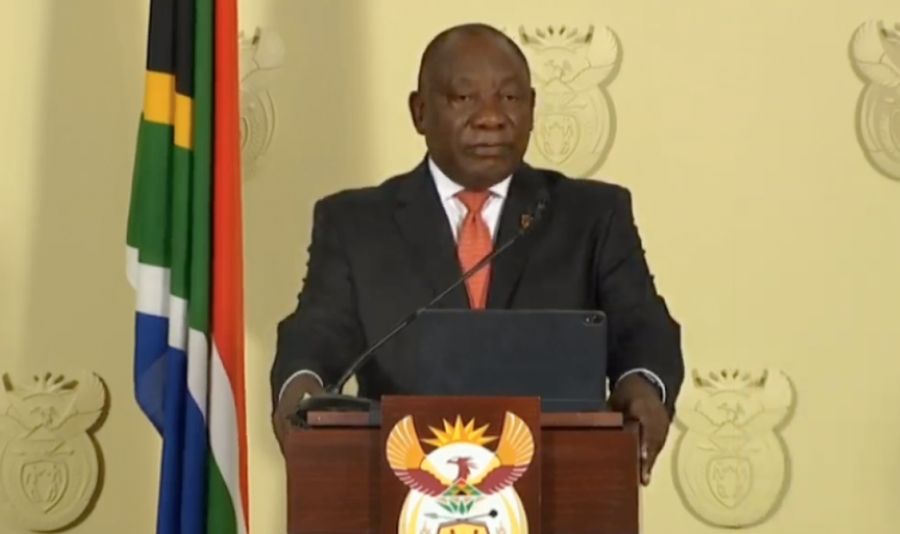 He said that since his last address a week ago the global coronavirus crisis has deepened from 160,000 confirmed COVID-19 cases to 340,000… while at home, the number has increased six-fold from 61 to 402.

He said the number will continue to rise, and it is clear that the preferred method of fighting the spread of the illness is to stay at home.

“It is clear from the development of the disease in other countries… that immediate, swift and extraordinary measures are required to prevent human catastrophe of fundamental proportions,” he said.

Ramaphosa said with the concern over the rapid rise of cases, and South Africa’s hospitals being stretched beyond what the country can manage, “we must  therefore do everything within our means to reduce infections, and delay the spread over a longer period… flattening the curve of infections…”

He said it is essential that every person in SA should adhere strictly to the regulations already in place; and that analysis shows URGENT and dramatic action is required over the next few days.

Without decisive action, he warned that COVID-19 cases would increase to tens of thousands and within a few weeks to hundreds of thousands… which is extremely dangerous for a population like South Africa’s where a large number have suppressed immunity – with HIV, TB or living in extreme poverty.

The President said those countries that have acted swiftly and dramatically have had far more effective results, and therefore the National Coronavirus Command Council has decided to enforce a nationwide lockdown in South Africa.

Despite the considerable impact this will have on people’s livelihoods and the economy, Ramaphosa stressed that “the human cost of delaying would be far greater”.

A fund has been set up for those who can – in SA and around the world – to please donate to help vulnerable South Africans – https://www.solidarityfund.co.za

The government has seeded the fund with R150-million.

The President applauded the commitment from the Rupert and Oppenheimer families who have donated over R1-billion each for small businesses and their employees to help cope during the tough times ahead.

Certain categories of people will be exempted including health workers, those in the production and delivery of food and essential products, and others. A full list will be published.

South Africans will not be allowed to leave their homes except under strictly controlled conditions to buy food, medicine or collect their social grant.

All shops and business will be closed except for pharmacies, essential banking, the JSE, supermarkets, petrol stations, health care providers and some others.

Firms that can continue to work remotely are encouraged to do so.

There will be provision for essential transport of staff and patients.

The army may be used to implement the nationwide lockdown.

A public health programme will be implemented with screening, testing, contact tracing and medical management.

There will be a centralised system to ensure hospitals are not overwhelmed.

Emergency water supplies – including water storage tanks and tankers, and boreholes – are being provided to informal settlements and rural areas.

South African citizens and residents arriving from high risk countries will automatically be placed under quarantine for 14 days.

Non-South Africans from high risk areas will be turned back.

International travellers who arrived after 9 March from high risk areas will be confined to their hotels until they have completed a 14-day period of quarantine.

President Ramaphosa said: “Our country finds itself confronted not only by a virus that has infected more than a quarter of a million people around the world – but by the prospect of deep economic recession…” He said some businesses will close and many will lose their jobs… and therefore it is vital that the country uses every resource.

The government, working together with business, is putting in place measures to mitigate the economic crisis.

He announced certain quick and targeted interventions to “cushion society from these economic difficulties”, and said further measures will be deployed as needed.

These include the Solidarity Fund mentioned above.

Ramaphosa called on everyone to act in the best interest of the country, not themselves; and said anyone caught selling goods at excessively high prices or involved in corruption or otherwise profiteering during this time, will be arrested and prosecuted, and jailed.

Regulations have been put in place to prohibit unfair price hikes, and South Africans are reassured that there will be adequate stocks so there is no need to panic buy!

A safety net is also being developed to support those in the informal sector whose business will suffer.

Special dispensations for companies in distress because of COVID-19 will be put in place.

Large companies are asked to be responsible for paying their workers and called on to take care of them.

A temporary tax subsidy of up to R500/month is being offered in some cases. More details will follow.

The tourism sector, which is particularly hit hard by the new regulations, will also be supported.

President Ramaphosa said in the times ahead “our unity will be put to the test”. He called on “one and all to play our part as South Africans… to show solidarity and compassion to one another. Let us never despair despite the challenges that our country is facing now. For we are a nation of one and we are surely going to prevail… God protect our people… God bless South Africa.”

DIRCO will address the media on Tuesday morning to describe how the new regulations will be implemented.

You can watch the full speech here if you missed it: