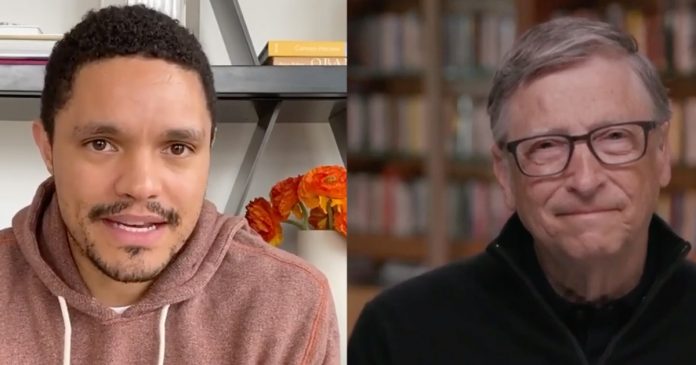 News24 admitted in a tweet on Sunday evening: “On Saturday, we published a story about philanthropist Bill Gates’ support for SA with Covid-19. We wrongly reported that Gates wants to test a “vaccine” in Africa. This is false. The Gates Foundation will support SA with testing kits and research. We apologise for the mistake.”

South African comedian Trevor Noah, who is based in New York and currently filming his The Daily Show from home, had interviewed Bill Gates about coronavirus for his show on Friday.

The following day News24 posted a story based on a tweet by President Cyril Ramaphosa – which included a snippet from the interview and a headline which the paper now admits was misleading and “was not supported by the substance of the story”.

It inflamed many people in Africa who thought they were about to be used as guinea pigs in a trial; and Trevor Noah was bombarded with hate messages including accusations that he had become Gates’ pharmaceutical rep and was selling out his people. He also allegedly received death threats from several quarters.

On Sunday night, following News24’s apology, Noah tweeted: “Now I see why I’ve been getting death threats for interviewing Bill. 😢”

The South African expat had been flummoxed on Saturday after receiving so many hate messages. In response to one tweet he said: “Where in this entire interview do you hear either of us saying a vaccine will be tested in Africa?”

Late Sunday night News24 published an “unreserved” apology to the “Bill and Melinda Gates Foundation and our readers for any harm caused by the publication of this false headline”, admitting that nowhere in Ramaphosa’s caption, nor in the video, does Gates mention testing a vaccine in Africa. The article has been removed, they said.

The newspaper’s chief editor Adriaan Basson said he will request an investigation. He said: “I am deeply embarrassed by this mistake and apologise to Mr Gates for any harm caused. We will learn from this episode and move forward.”

While some social media users have congratulated Basson for largely doing a phenomenal job under extreme stress, others have said this apology is too little too late, and devastating damage has already been done. There were calls for the writer and editor to resign, and some said: “How do we trust anything from now on???”

Simon Grindrod tweeted: “Ordinary citizens are getting arrested for spreading fake news about the Corona virus during our national crisis. Why aren’t the authors of fake news also facing the same penalties? #News24 #GatesFoundation #TrevorNoah #FakeNews”

Several have also called for News24 to apologise unreservedly to Trevor Noah as well, since he received much of the backlash; as well as to “the entire country”.

Where in this entire interview do you hear either of us saying a vaccine will be tested in Africa? Are you confusing us with those French doctors or are you just trying to get retweets? https://t.co/eeqEIZWVPx

Trevor’s reaction to News24’s apology to its readers:

Now I see why I’ve been getting death threats for interviewing Bill. 😢 https://t.co/3UIeYQi2z0

What are we missing in the fight against coronavirus? @BillGates explains: pic.twitter.com/rD8W2w31nX

Trevor and Bill Gates discuss coronavirus testing, accelerating vaccine development and how the world will rebound.