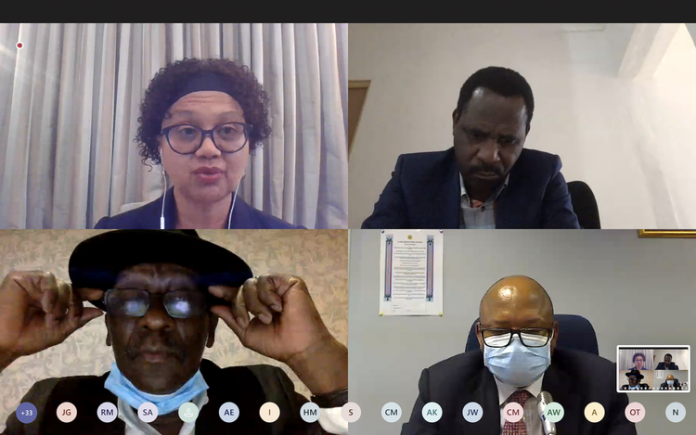 Police were accused of killing five people during the enforcement of the first three weeks of Covid-19 lockdown… writes Daneel Knoetze for Viewfinder.

Police were accused of killing five people during the enforcement of the first three weeks of Covid-19 lockdown, recently published statistics have confirmed. The details of two of those alleged killings have not been previously reported. They are published here for the first time.

There have also been 152 assault cases, five corruption cases and 37 complaints of shootings related to police lockdown enforcement during that period.

The source of the statistics is an Independent Police Investigative Directorate (IPID) slideshow which was due to be presented to Parliament’s Portfolio Committee on Policing (PCP) on Wednesday. The IPID presentation was postponed until next week because the committee’s meeting with police management, a video conference call which included police minister Bheki Cele, ran overtime.

Cele was nonetheless questioned by MPs about allegations of police heavy-handedness in enforcing lockdown regulations.

Andrew Whitfield (DA) questioned the minister about his reading of the Petrus Miggels case. Miggels, of Ravensmead in the Western Cape, died after an alleged assault by police officers on the first day of lockdown.

Earlier on the day of the committee meeting, Viewfinder published an investigative article which analysed IPID’s decision to close the case and effectively clear police of wrongdoing.

Kenneth Meshoe (ACDP) asked about a scenario wherein elderly people, too frail to collect food parcels themselves, sent their grandchildren on their behalf.

“[The grandchildren] are being arrested and they are being beaten by the police… My question is: how can the police help in such a case?”

Time ran out on the meeting and Cele was not able to respond to all the MPs’ questions, including the two above. Committee chairperson Tina Joemat-Pettersson asked the minister to respond in writing.

Details of two of the alleged killings by police, outlined in IPID’s slideshow, have not been reported in the media.

One case came out of Lenasia, Gauteng on the night of 1 April. Police allegedly assaulted and arrested a number of people for contravening lockdown regulations. All of the arrested people were “detained with injuries”.

Later, during a cell visit by police, it was found that one of the detainees had died. An IPID investigator obtained statements from six witnesses, viewed the body and observed “that the deceased had suffered serious injuries”.

A postmortem was conducted, but the results are still outstanding.

On 13 April, police allegedly shot a man in Groblershoop, Northern Cape. The man was wanted for malicious damage to property and the violation of lockdown regulations. When police arrived at his home, he broke open the side of his shack and allegedly “attempted to stab the police officers”.

An officer fired “warning shots”, the second of which hit the man who died on the scene. A postmortem revealed that the cause of death was consistent with “gunshot complications”. The officer in the shooting has been placed on special leave while the investigation is ongoing.

The details of the three other death cases – of Miggels in Ravensmead on 27 March, of Sibusiso Amos in Vosloorus on 29 March, and of Adane Emmanuel in Isipingo on 2 April – were reported in the media during the first week of lockdown. IPID closed the Miggels case after an autopsy found that he died of “heart failure”.

With regard to the Vosloorus case, IPID reported that it was in fact a private security guard, backing up a patrol by Ekurhuleni Metro Police officers, who allegedly shot and killed Amos. The security guard was charged and released on R20,000 bail.

An Ethiopian man, identified by Eyewitness News as Adane Emmanuel, was allegedly assaulted and arrested by police during a lockdown operation in Isipingo on 2 April, KwaZulu-Natal, IPID reported.

The police then drove him to a clinic where he later died. IPID said that it has identified witnesses willing to cooperate but has not yet taken their statements. Members from both Durban Metro Police and Isipingo police station were identified as suspects. Upon receipt of the postmortem report “the arrest will be effected”, IPID said.

IPID acknowledged that the restrictions on movement may have prevented members of the public from reporting cases. This may result in more cases being reported after the lockdown period, the directorate said.

Yet the total number of complaints to IPID (403 of which 204 were apparently not directly related to lockdown enforcement) has increased compared to the same 21 day period in 2019 (when 361 cases were reported).

IPID takes in an average of about 6,000 cases per year – a number which outstrips the poorly resourced directorate’s capacity to investigate all these effectively. That means that, year on year, the backlog of cases further inflates the directorate’s workload. During the 2018/19 reporting year the police watchdog’s caseload comprised more than 11,000 cases.

In some instances, as Viewfinder reported last year, IPID rushes poorly investigated cases to completion and closure to inflate performance statistics and to clear them off the active caseload. The practice was described as “killing files” by one whistleblower.

The overall statistics in IPID’s presentation revealed how frequently police have been accused of killing people recently: a total 21 cases of “death as a result of police action” (lockdown and non-lockdown related cases) were registered during the 21 day period under review.

At the onset of the lockdown, Viewfinder reported that high levels of police brutality have always been the norm in South Africa. Police kill at least one person on average a day.

This article was produced by Viewfinder, a project incubated by GroundUp. The article forms part of an ongoing investigation of police criminality and oversight in South Africa. It was made possible, in part, by a Henry Nxumalo Grant for Investigative Reporting.

This is not published under GroundUp’s usual Creative Commons license. Permission to republish has been granted by Viewfinder.