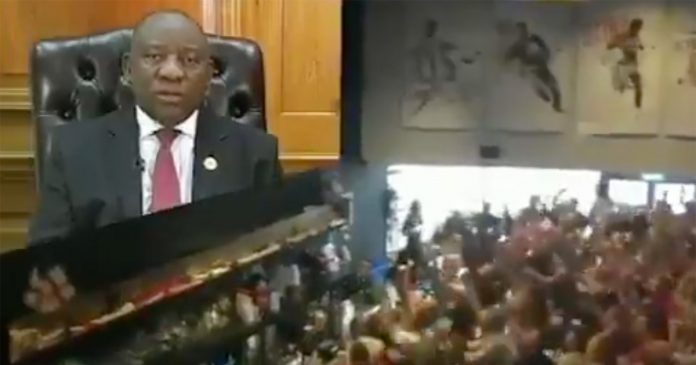 A video of South Africans appearing to be celebrating the lifting of the alcohol ban in Level 3 has gone viral in SA and amongst expats around the world. (Watch below.)

The video, posted by Joburg marketer and public speaker Mike Said, shows a crowded bar erupting in cheers as Ramaphosa is seen making the announcement on a large screen TV.

It’s clearly a joke, with the crowd scene probably filmed at a sports event (Swiss flags can be seen near the TV), and definitely shot pre-Lockdown (when the gathering of crowds was allowed)! But that hasn’t stopped some people genuinely asking: “Where was this filmed?”

The video has gone viral with over 100,000 views on Facebook in 12 hours. It may not be real, but it definitely captures the mood of many South Africans after Sunday night’s announcement that alcohol will be sold from 1 June, although under restricted conditions.

Alcohol, are we happy people?

If you can’t view above, try this: