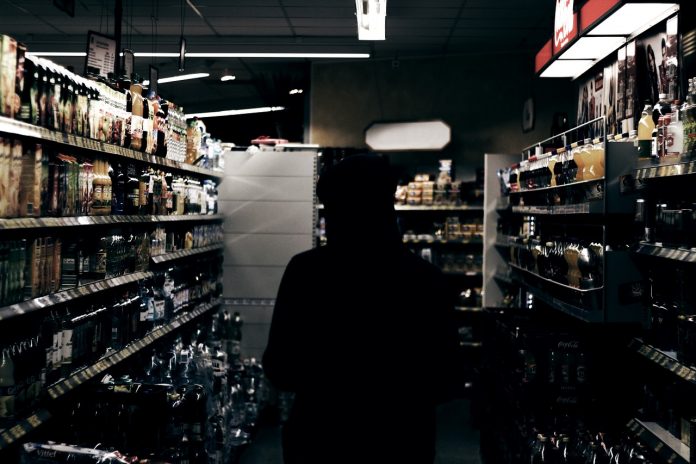 With British newspapers calling it ‘The Crate Escape’, thieves in South Africa managed to tunnel into a Joburg bottle store and steal about R300,000 worth of alcohol, during the Lockdown.

The incredible theft was only discovered a few days ago when the manageress entered the closed premises to start preparing for the liquor store to re-open today, 1 June, as Level 3 regulations relax to allow for the sale of alcohol during certain hours.

Many South Africans queued up this morning to finally buy alcohol at 9am, after a nine week ban, but it appears some could not wait!

The shocked manageress at the Shoprite LiquorShop in Johannesburg found there was hardly a drop to sell since thieves had held their party early as this tunnel clearly shows!

Somehow during the shut down they had tunnelled up through the two-foot thick concrete and spirited the entire stock of alcohol away!

A Shoprite source said: ”The manageress could not believe her eyes when she went in to prepare for the re-opening as all the alcohol was gone from most of the shelves.

“The store was still fully locked up and it was only when she walked round that she found this open tunnel by one of the fridge freezers and realised what had happened.

“It seems the thieves had worked out where the electrical and storm water drains run below the shopping mall to the shop and how to get right underneath the liquor store.

“They must have had pneumatic drills or used hammers and chisels but did not make any noise and had to break through several feet of concrete to tunnel up into the shop.

“The CCTV cameras have been reviewed and it shows three men inside the store 10 days ago but there must have been many more out-of-sight waiting in the tunnel below.

“They must have passed all bottles of whisky, rum, gin, vodka, brandy, bacardi and whatever down the hole as well as all the crates of cider, lager and real ale until it was all gone.

“The booze must have been through a chain of hands to a waiting truck.

“We reckon it must have taken some time and several visits to empty the off-licence and we had no idea until our manageress went in to open up the store for business”.

The store at the popular Newton Junction mall had been shut down on March 27 as part of the Covid-19 lockdown throughout South Africa which banned all alcohol as well as cigarettes.

Since the lockdown alcohol has been in huge demand with bottles of wine and spirits selling for up to four times normal value on the black market to desperate drinkers.

On Friday the manageress returned to the Shoprite store to take in fresh stock ready for the re-opening rush today.

Shoprite said they had no idea how many people were involved or how long it had taken to drill the tunnel into their store and steal all the alcohol, worth over R300,000 (£15,000).

Loss Control Manager Oswald Meiring confirmed CCTV footage on May 21 showed three men inside the store probably passing stock to others in the tunnel below.

A South African Police spokesman said the CCTV footage was being checked along with all the entrance points to the storm drains and electrical service hatches in the mall.

At least 18 people have sadly died in SA after making powerful home brew spiced up with additives like sanitiser or ethanol, and dying in agony from the mixture.